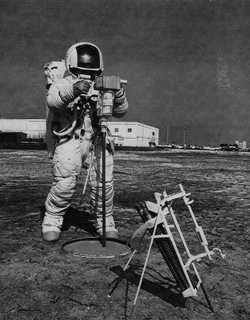 On the 40th anniversary of the Apollo 11 moon landing, astronaut Neil Armstrong taking "one small step for [a] man" is the iconic image of the day.

Today is also a good moment to recognize how much the giant technological leaps the research and development done for and by NASA over the decades have influenced the everyday products we now take for granted.

As with Tang, Teflon, and Velcro, cordless tools weren't invented specifically for the space program. Black & Decker had actually rolled out the first cordless drills in 1961. By 1964, Black & Decker was supplying NASA with cordless drills that could turn bolts in zero gravity without also spinning the astronauts on the Gemini missions. The photo shows Apollo 13 lunar module pilot Fred Haise testing the Apollo Lunar Surface Drill at the Kennedy Space Center. You can see the handle, battery, power head, and drill stems in the picture. (See our latest report on cordless tools and our buyer's guide to cordless drills and tool kits; ratings are available to subscribers.)

By 1969, the astronauts' tool kit had expanded considerably. To extract rock samples from the lunar surface, the Apollo astronauts packed a rotary hammer drill that could operate at extreme temperatures and in zero-atmosphere conditions. A computer program was used to design a motor that would require as little energy as possible.

After these challenges, developing tools for earthly use and users proved much easier, and a wide range of cordless tools for consumer use (including the Dustbuster line of small vacuums) followed. Consumer designs have been refined to the point where NASA recently modeled the new Mini Power Tool needed to repair the Hubble Space Telescope on a popular cordless screwdriver from DeWalt.—Gian Trotta | e-mail | Twitter | Forums | Facebook

Essential information: See our coverage of tools and power equipment for full reviews of a wide range of useful implements.