At Woodstock, there was plenty of peace & music—but few toilets 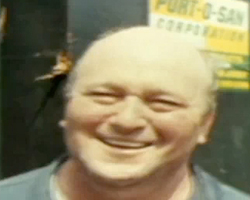 Woodstock, the film by Michael Wadleigh that came out in March 1970, less than a year after the legendary three-day happening of the same name in Bethel, New York, features some incredible moments, but for many who've seen the movie, one seemingly incongruous part is particularly remarkable.

Often referred to as the "Port-O-San sequence," this short section of the film captures a middle-aged man cleaning the portable toilets (shown) who notes that he was "happy to do this [job] for these kids." If you've seen the film, you know the juxtaposition of the Port-O-San man and the legions of concertgoers at the Woodstock "aquarian exposition" makes for a charming if not bizarre moment. (Check out the scene in this video on YouTube.)

But that's not the only odd bathroom-related nugget from Woodstock, whose 40th anniversary is this weekend and which will be the subject of Ang Lee's new film Taking Woodstock. It turns out that there were only 600 toilets available for the estimated 500,000 people who attended the festival on August 15-17, 1969, at Max Yasgur's farm in upstate New York.

Granted, far fewer folks were expected and certainly many in the crowd likely went the alfresco route, but can you imagine the bathroom mayhem with only one toilet for every 833 attendees? The organizers of Woodstock '94 had 2,800 toilets on hand, and the new Yankee Stadium, with a capacity of about 52,000 has 843 toilets, or about one toilet for every 62 fans.


We can't tell you how many toilets to install at your home, but our latest report on toilets (story and ratings available to subscribers) will help you find the models that performed best in our rigorous tests. And if you're remodeling your bathroom, read our reports on bathroom makeovers and water-saving showerheads.—Steven H. Saltzman | e-mail | Twitter | Forums | Facebook

Essential information: Save yourself money by buying the top toilet papers from our latest report, which includes coverage of green products.