From the Windows 7 launch: Touch technology is a prominent feature 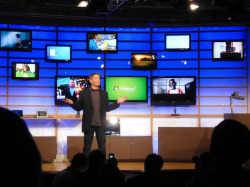 After starting the Windows 7 launch here in New York with a cutesy moment—Microsoft CEO Steve Ballmer presenting Kylie, of Win7 TV-commercial fame, with a pink laptop—Ballmer and company moved right into a demonstration of the new OS's top features. (See our related post: "Windows 7: To upgrade or not to upgrade")

Touch technology plays a big role in Windows 7, and is likely to result in a wide range of new products from manufacturers. For example, Microsoft this morning announced a new app from Amazon that will let you read your Kindle content on a Windows 7 computer. Thanks to touchscreen capabilities, you can scroll through e-books using multitouch finger gestures.

With Windows 7, Windows Media Center also gains touch-based features. Microsoft's vice president of consumer marketing, Brad Brooks, demoed the results of a deal with CBS that will let you watch any show from the TV network on your PC. Scroll through and choose the shows using, you guessed it, your computer's touchscreen.

In one of the launch's "that‘s kinda cool" moments, Brooks fed music, photos, and video to 17 different pieces of equipment—several TVs, an Onkyo receiver, a digital picture frame, and an xBox 360-connected TV—all from one Windows 7 PC, all at the same time. (See image above.)

Keep an eye on our blog over the next days and weeks as we bring you news on product launches surrounding Windows 7. If you're interested in buying it, see how to buy it (legally) for under $120.
—Donna Tapellini