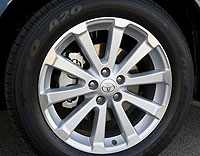 Consumer Reports runs the largest tire testing program in the United States. And one of the main things we've found in our testing lately is that keeping fresh tires on your car is getting more expensive.

One reason for the increased cost for rolling stock is that more and more family cars are coming equipped with higher-speed rated tires. Speed ratings indicate the highest speed a tire maker considers safe for that tire to travel and is designated by letters such as Q, S, T, H, V, and Z along with the tire size information on the sidewall. All these ratings cover speeds well above legal limits. The most popular, S, T, and H, are rated for 112, 118, and 130 mph, respectively.

Traditionally, most family cars have used S- and T-rated tires, while tires rated H and higher have mostly been available only in sports cars or upscale sports sedans. But when we tested this year's group of all-season passenger-car tires, we found a growing number of popular cars are equipped from the factory with H-speed rated tires. Partially, this is because tire manufacturers have an easier time meeting the latest tire safety standards with higher speed-rated tires. Other factors include using performance tires that are better suited to the elevated levels of acceleration, braking, and handling that todays family cars are capable of achieving, and finally, marketing is driving the move to squatting low profile performance tires.

So what should drivers do?

A key lesson here is to be aware of the tires on the vehicles you are considering purchasing. Not only have speed-ratings increased since your last purchase, but so have the overall size. There are family vehicles now, such as the Toyota Venza, that are available with 20-inch wheel diameters—a size considered exotic just a few years ago. Carefully consider the benefits of upsizing the wheels when you buy the car, either from the factory or with aftermarket wheels.

Most vehicles are available with a choice of fitment, often characterized as a base tire/wheel combination and a sportier option. Often the more aggressive tire/wheel combination will enhancing traction and even give the car a more sporty feel, with heavier steering and greater road feedback. However, such upgrades often lead to compromises with a harsher ride and shorter tread life, plus a greater upfront cost. The lesson here is to think twice before upgrading the rubber on your new car.

For owners looking at tire replacement, we don't recommend downgrading because it introduces a safety risk. Tires with higher speed ratings generally have better steering response and cornering grip than lower-speed rated tires, in addition to being capable of higher speeds. So if your car originally came with H-rated tires, that's what you should replace them with. After all, the automaker spent millions on testing the car with that specific configuration, including suspension and braking systems.

While the speed ratings are one more factor to consider in your next vehicle purchase, it is better to be armed with the information before having to visit the tire store earlier than expected.

To find the best tires for your car, check out our tire ratings (for subscribers). Or check out our general advice on tire safety and shopping for tires.