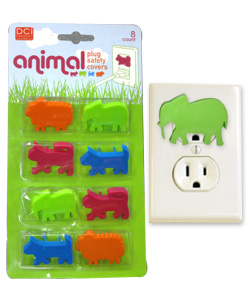 A concerned grandfather wrote to us recently to say that the family of his "toddler granddaughter" had been given some animal-shaped outlet covers that he suspected were more of a hazard than an effective childproofing device. The multi-colored plastic plugs "certainly would seem to be attractive to a toddler," he wrote. He also expressed concern about the package labeling that warned "Choking hazard, small parts."

Indeed, to the average adult, electric outlets seem mundane, but those mysterious slots in the wall are fascinating and dangerous to babies and small children. Our analysis of data from the Consumer Product Safety Commission indicates that there have been an estimated 8,000 electrical injuries to young children from 2000 to 2007 related to electrical outlets.  Many incidents involved small children sticking bobby pins, keys, fingers and toys into outlets. Fortunately, most of the consequences were minor electrical burns to the hands and fingers.

The American Academy of Pediatrics advises parents to use plug protectors for all wall outlets. So any product that covers those outlets would seem like a good idea, right? Not always.

Colors and shapes that attract little ones can have exactly the wrong result. Instead of keeping kids away from outlets, the bright, appealing figures of the DCI Product/Decor Craft Inc. animal safety covers described by our reader may tempt children to tug them out, creating both a shock hazard and a choking hazard.

We found the safety covers very easy to remove from some electrical outlets.  Even if your child couldn't manage to pull the cover out herself, an adult could inadvertently forget to reinstall the outlet protector after, say, charging a cell phone. The cute shape and brilliant color could beckon a curious toddler.

In the past, we have rated other outlet protectors that were small enough to be choking hazards as Not Acceptable. These animal-shaped plugs may pose more of a hazard because they look like toys.

Our take:  We think the DCI Products Animal Plug Safety Covers present a risk to children and shouldn't be sold. There are better ways to protect your children. For example, we've seen a spring-loaded outlet cover that is easy enough to use by adults but hard for children to negotiate.  -- Sue Booth