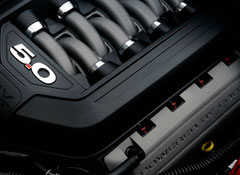 The 2010 model year saw a classic muscle car clash between the retro-themed Chevrolet Camaro, Dodge Challenger, and Ford Mustang. All three coupes share a clear visual connection to their original namesake models, and the spirit lives on in a modern package, complete with 21st-century conveniences and safety equipment. We tested all three muscle cars this past year, and declared the updated Mustang to be the better car. For 2011, the entertaining pony car will bring many more horses to market, addressing key spec-chart deficits.  The new 3.7-liter V6 engine in the base Mustang produces 305 horsepower (way up from 210 hp), along with 25-percent better fuel economy, according to Ford. This aluminum Duratec engine stacks up well on paper against the 304-hp Camaro V6 and trumps the base Challenger by 50 horsepower.

Enthusiasts will howl at the return of the "5.0" designation on the new V8 engine to debut at the upcoming North American International Auto Show in Detroit. In the 1980s, Ford changed its engine designation from 302 cubic inches to 5.0-liters, and a powertrain legend was born. Horsepower was modest, but torque was relatively prodigious. More importantly, the 5.0-liter V8 was easy to modify and came in an affordable car. With 412 horsepower in the 2011 Mustang GT, there may be fewer enthusiasts this generation who demand even more output—especially when the 540-hp Shelby GT500 can be ordered right from the dealership.

The all-new engine, codenamed "Coyote," was developed to boost power in the rpm range used most by drivers, while also improving fuel economy. Output is on par with the Camaro SS and Challenger SRT8, though in a lighter car, there is serious performance potential. It will be offered with a choice of six-speed automatic and manual transmissions, with the auto gearbox promising better fuel economy, with an estimated EPA-rated 17 mpg city, 25 mpg highway.

The 2011 Mustang GT has a number of detail upgrades, including MyKey programmable key, universal garage door opener, integrated blind-spot mirrors, and pre-requisite "5.0" fender badges. The brakes are upgraded, with 11.5-inch front and 11.8-inch rear vented discs. Brembo high-performance brakes will be available. The suspension has been revised, with a new rear lower control arm and stiffened rear stabilizer bushings. Not surprisingly, convertible models are structurally fortified to counter the increased twisting force.

Despite the motoring tide shifting toward small, frugal people movers, the muscle car segment will continue to stir automotive passions.