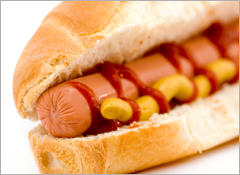 If you've been following the news this week on hot dogs and choking, it's likely you have an opinion on the suggestion to "redesign" this popular kids' food, particularly if you have young children. A report in the most recent issue of Pediatrics seeks to make choking prevention a priority for government and food manufacturers. The American Academy of Pediatrics says that, as with small toys, foods that are choking hazards should carry warning labels. And some hot dog brands already do.

In 2000, 160 children ages 14 years or younger died from an obstruction of the respiratory tract due to inhaled or ingested foreign bodies, according to the most recent data from the Centers for Disease Control and Prevention. Of these, 41 percent were caused by food items including hot dogs, grapes, carrots and hard candy.  About 17 percent of food-related asphyxiations were caused by hot dogs.  For every choking-related death, there are more than 100 visits to U.S. emergency departments. In 2001, an estimated 17,537 children 14 years or younger were treated in the ER for choking episodes.

In a policy statement, the AAP said that food manufacturers should design new foods and redesign existing foods to avoid shapes, sizes, textures and other characteristics that increase choking risk to children, to the extent possible. "If you were to take the best engineers in the world and try to design the perfect plug for a child's airway, it would be a hot dog," says statement author Gary Smith, director of the Center for Injury Research and Policy at Nationwide Children's Hospital in Columbus, Ohio. "I'm a pediatric emergency doctor, and to try to get them out once they're wedged in, it's almost impossible."

Read the full post on hot dogs on the Safety blog and take a look at these tips for preventing choking on food.