Mountain do: Protect your noggin on skis or a toboggan 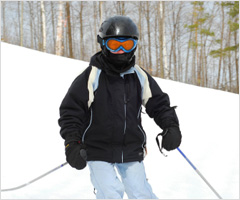 Ski Safety Week may be seven short days, but ski safety should be a season-long event. Especially when you factor in the newest conclusions about the benefits of wearing ski helmets.  (You'll need Adobe Acrobat to read the full-text version.)

The paper, published in the latest issue of the Canadian Medical Association Journal, crunched the numbers from 12 studies that looked at helmet use and injuries among skiers and snowboarders. Five were done in Europe, one in Asia, and six in North America.

The bottom line for the top of the body: "The use of helmets significantly reduced the risk of head injury." In fact, by 35 percent. That should be enough to convince powder hounds to put one on.

Two excuses are given for not wearing helmets. The first is that they increase the risk of neck injuries, especially among children. Not so, the study says; there is no significant association. The second is that they create a false sense of security, which leads to more aggressive behavior on the slopes. For that, the evidence is mixed. Some of the studies showed that helmet-heads were more likely to take risks, and some showed that they were, like minivan drivers, inherently a more cautious bunch.

A meta-analysis like this one is a succinct and comprehensive way to look at results from a lot of studies and come up with a single conclusion. In this case, it's that wearing a ski helmet gives you a much better chance of not being one of the 80-plus skiers and snowboarders each year who are killed or seriously injured by a bash to the head.

While the scope of this study did not include other downhill racers such as tubers and sledders, more and more experts are calling for helmet use for anyone who speeds down the slopes.