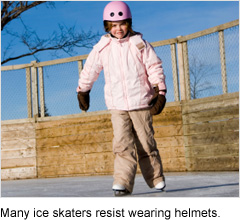 The skaters' costumes at the Winter Olympics are getting almost as much notice as the performances. (Okay, in Johnny Weir's case, more notice.) But one thing you'll rarely see a figure skater wearing is a helmet. Some sports physicians and trainers think that's a mistake.

Requiring an elite skater to wear a helmet may not be practical—and learning to fall is part of their training. Still some have suffered horrifying accidents. And a recent study concludes that helmet use would prevent a large number of head injuries, especially in children.

After one of his skaters suffered a severe head injury in a brutal fall 10 years ago, Ron Ludington, coach, Olympic medalist and World Figure Skating Hall of Famer, began advocating helmet use. "I've thought about helmets for years and even keep one right here in case anyone wants to wear it, but of course they don't," Ludington, a former Olympic pairs skating champion, said at the time. "If Paul ( Binnebose) had been wearing a helmet he might have suffered a concussion or had a bad headache, but he wouldn't have been injured as seriously."

But that discussion seems to have gone the way of the single axel. And helmets are not as commonly seen on recreational ice skaters as they are on skateboarders and in-line skaters.

A study conducted by the Center for Injury Research and Policy at the Children's Hospital in Columbus, Ohio concluded that the proportion of head injuries among ice-skaters was greater than that observed for participants in other types of skating (skateboarders, roller skaters and in-line skaters) for which helmet use is recommended and often required.

The study concludes that helmet use by children should be mandated at indoor skating rinks. And the Consumer Product Safety Commission recommends that ice skaters use bicycle, ski or skateboard helmets.


If your little one is concerned that a helmet would cramp his or her skating style, consider covering one with sequins.  After all, there's no shortage of bling at the Pacific Coliseum rink.