Apple iPad: What our labs tests have uncovered so far 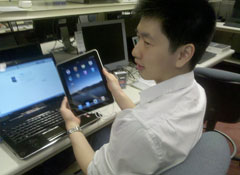 A team of our engineers has been testing iPads in our labs since the stores opened this morning. (Check out the video, Apple iPad Review from Consumer Reports, at the end of this post.) Here's some of what they've found out about it so far:

Colors are excellent and look similar to those on the 27-inch iMac in our labs. The viewing angle is excellent, with only slight dimming and no washing out at even extreme angles. As with other edge-to-edge glass displays, the iPad's is susceptible to glare; it doesn't appear to have an anti-reflective coating. It's also highly susceptible to fingerprints, which can be an issue when watching dark movies or viewing the iPad in direct sunlight. The display is readable in direct sunlight, though doing so isn't very comfortable.

Watching movies, we didn't detect any noticeable blurring. Video was sharp at native resolution for a movie downloaded from iTunes, although visual "noise" could be seen when we zoomed in.

Screen resolution is high enough that, if you have good eyesight, you don't have to zoom. As expected, on sites that use flash video, the video wasn't visible. Instead, the site displayed an empty white box where the video would be.

In portrait mode, the on screen keyboard required a bit of finger dexterity when typing with thumbs. Children may find that difficult to do. The keyboard is larger and less cramped in landscape mode and it's similar in size to the keyboard on a 10-inch netbook.

Our tester found it very awkward to use, in landscape, while holding the unit up; the iPad had to be placed on a lap, desk, or tabletop. The keyboard provides audible feedback when you type and it adapts to different situations. For example, there's no space bar when you're typing something, such as a web address, that shouldn't contain spaces. The touchscreen isn't pressure sensitive; you can't type with fingernails alone, you must touch it with your skin.

The speaker is mono.

The accelerometer, which rotates the display when you turn the iPad, seemed too sensitive, but you can lock its orientation.

On non-Mac PCs, we couldn't charge the iPad using a USB port.

The Netflix app was buggy and the video skipped.

Stay tuned for more findings in the next few days, as we dig even deeper into the workings of the iPad.

Weigh in below with any findings of your own and questions you have about the iPad.