Community goes to the dogs: Should pets be treated like people?

Saratoga Springs, N.Y., has had a long love affair with animals, particularly horses, but the touristy city, located about 170 miles north of New York City, recently launched a campaign to embrace another group of four-legged friends in a way few communities would dare try.

Dallas and Flax canvassed local stores to see if there was adequate support for the idea, and the response was pretty enthusiastic, to say the least. Even the mayor and his canine companion Chase turned out for the May 15 kickoff event on Broadway, the main drag, where a variety of restaurants with outdoor dining options (only service animals are allowed inside restaurants), joined with a bank, art gallery, hotel, hardware store, clothing boutiques, bars, and other merchants in rolling out the welcome mat for Fido. 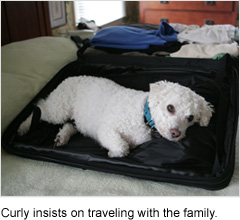 The dog-friendly businesses are identifiable by the accompanying blue sticker prominently displayed in windows of participating stores, which have agreed to keep their policies in place for at least a year.

What's in it for merchants? Allowing dogs into their shops, Dallas says, simply makes good financial sense.  "In these rocky economic times, attracting new customers to a business is paramount," she says.  "As a collective group, dog owners are a very loyal bunch.  When a business opens its doors to dogs, that loyalty that owners share with their dogs has a way of translating to the dog-friendly business. As a business owner, if you can develop a relationship with both the dog and its owner, you have a customer for life. In Saratoga Springs where our Dog-Friendly Downtown (DFD) Program has grown from 12 participating businesses to over 30 in the last nine months, feedback from merchants has been very positive. Dog owners are able to spend the whole day shopping, strolling, and eating with their dog by their side. Without the DFD program, those same people may have spent only a few hours downtown or may not have come at all.  While hard to measure, the DFD program is undoubtedly beneficial to the local economy." 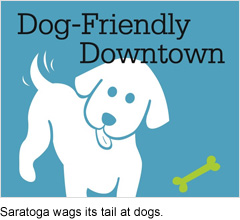 Is there a downside to allowing pets and people to mingle freely in business establishments? The topic has generated spirited debate among citizens voicing their opinions on the Web site of the local newspaper, The Saratogian. Many contend that that dogs and people in such close quarters aren't a good mix for various reasons including safety, hygiene, and unpredictable behavior. After all, dogs are first and foremost animals. Not surprisingly, pet lovers have a different take, citing the status of their faithful friends as bona fide family members, and adhering to the belief that a well-behaved dog is less annoying and offensive than a whining child or baby in need of a diaper change. These debates can get a bit ugly.

"Just like any community program or business trend, there will always be questions raised and opinions voiced," says Adrianna Flax. "There is a place for this type of discourse surrounding any public program, as both sides of a matter should be heard. Reading letters to the editor in our local papers or Facebook posts criticizing or attacking the DFD Program and all dog-friendly businesses, could have been discouraging, however, I believe that locally our supporters have been louder, more steadfast. It is important for dog-friendly businesses and towns to be aware of comfort and needs of their patrons and act accordingly if they see any disruption in their space, but this type of customer-care should happen no matter if the source of the issue is two-legged or four."

While Saratoga may be at the epicenter of the great doggy debate, there's no doubt that more and more businesses around the country are opening their doors to people and their pets, including hotel chains like the Ritz Carlton and Sheraton, which will provide your companion with a Sweet Sleeper dog bed, bowl, mat, 'Dog in Room' sign, and pet welcome kit.

What's your opinion? Do dogs belong in stores, hotels, and other places of businesses? Down the road, we're planning a story for people traveling with their pets. So we're listening carefully to what you have to say.