The real risks of sulfites 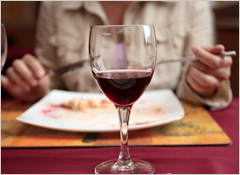 Lots of folks get headaches from drinking wine, and some people believe that sulfites are to blame. That hasn't been proved in scientific studies, but what is known is that foods and beverages containing sulfites can cause severe and even deadly reactions in some people. Sulfites can trigger severe asthmatic symptoms in sufferers of sulfite-sensitive asthma. People deficient in sulfite oxidase, an enzyme needed to metabolize and detoxify sulfite, are also at risk. Without that enzyme, sulfites can be fatal. Because of the danger, labeling is required when sulfites are present in foods at levels at or above 10 parts per million (ppm) or whenever they're used as a preservative.

Sulfites occur naturally in many foods and are a by-product of fermentation, so they're in most wines. they're also added as preservatives or antioxidants to wines, dried fruits, and other foods to increase shelf life, preserve color, and inhibit microbial growth.

If you suspect you might be sensitive to sulfites and want to avoid foods that contain them, look for wines with none added, such as organic wines. But be aware that if the label says "made with organic grapes,"the wine can contain up to 100 ppm of total sulfites. When buying dried fruit, look for those labeled unsulphured. With processed foods such as baked goods, snacks, and jam, scan ingredient labels for sulfur dioxide, potassium bisulfite, potassium metabisulfite, sodium bisulfite, sodium metabisulfite, and sodium sulfite.

This article first appeared in the June 2010 issue of ShopSmart magazine.