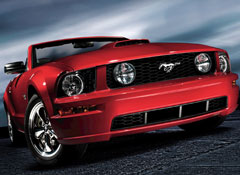 If your car was repaired with cheap bumper replacement parts not made by the original automaker, your air bag may not deploy as expected if you get into another crash, according to computer-simulated crash tests conducted by Ford. 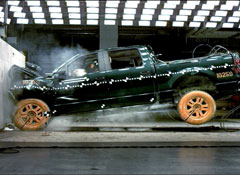 The bumper beam, which lies unseen beneath the decorative plastic bumper cover, plays a critical role in auto safety. In a frontal crash, the bumper beam is the first structural part to suffer the impact and initiate vibrations through the vehicle body. Those vibrations are ultimately picked up by sensors, which determine whether the air bag should be deployed or not, and how quickly.

In the Mustang comparison, the original Ford bumper beam was a one-piece beam made of ultra-high-strength steel. The aftermarket copy was made up of two pieces of so-called mild steel spot-welded together. "Differences in material will result in a difference in the timing of the air bag deployment," says Warwood.

David Zuby, chief research officer for the Insurance Institute for Highway Safety (IIHS), agrees.  "The vehicle structure is part of a complex system designed to protect people in crashes, as well as hold up the engine. There's a lot of engineering that goes into making a crash protection system. You can't willy nilly change those parts, because the system won't work the way it was designed," says Zuby.

The IIHS, a research group funded by the insurance industry, has not crash-tested aftermarket bumpers, frame rails, or other safety related parts. However, it does not advocate their use, because there is no system in place to guarantee that they would perform the same way the original parts would in a crash. "There's too much unknown to recommend them," says Zuby.

Ford examined the original and imitation structural radiator support for the F-150 pickup. Ford's original support was made of magnesium. The non-Ford copy was made of molded plastic with a sheet-metal rib pop-riveted to it. This part raised red flags with Ford engineers because one of the vehicle's air bag sensors is mounted to the hood latch support bracket which is mounted to the radiator support.

Finally, the parts were scanned and plugged into computer models of the Mustang and F-150, along with their materials properties. Those models are used to computer-simulate crash tests at 8, 12, 25, and 35 mph.

The Ford test results, while limited to only two aftermarket component sets, are important, because they credibly demonstrate that replacing the original automaker's safety related parts with cheap knockoffs may increase the risk of injury to vehicle occupants in a subsequent crash. While Ford shared these findings, the lesson may apply to all vehicles where safety-related replacement parts are not sourced from the automaker.