First Looks: Dell Streak is a capable, but small tablet 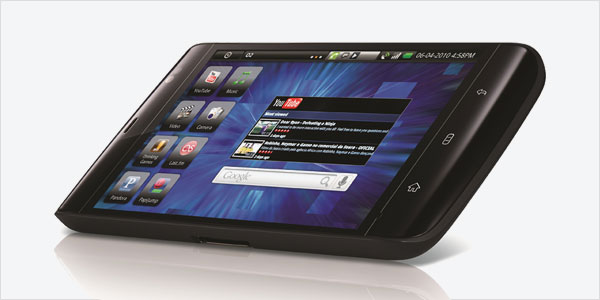 Are American consumers ready for a tablet one quarter the size of the iPad (making it "Pocket Friendly," according to Dell)? We should find out soon, because that's when Dell says its 5-inch Streak will go on sale in the US. (It's already for sale in the UK).

The Streak uses the Android operating system found on numerous smartphones and can (outfitted with a compatible SIM card and telecom plan) serve as a fully-functional, if large, smartphone. But Dell has positioned it as a tablet. An as of now, carriers and plans haven't been announced.

I have a press sample of the Streak, which I've been using for a short time. (The sample didn't include a SIM card, so my Net connection was strictly Wi-Fi). Based on that experience and my perspective from having used the iPad tablet for four months, here are some preliminary impressions.

Size matters. When it comes to tablets, that's the 600-pound gorilla in the room. The iPad has been criticized for being nothing more than an oversized iPhone or iPod Touch. I've explained why I disagreed with that criticism. Using the Streak has reaffirmed my conviction.

I found the Streak's 5-inch display big (and reasonably sharp) enough for e-mail, quick Web browsing, viewing snapshots, and watching YouTube videos. However, I wouldn't want to be confined to a display that small when reading books, watching movies or TV shows while leaning back (as when flying), viewing landscape photos, or playing action games—not to mention Scrabble.

Of course a smaller device's portability is an advantage, but it may not be a big enough advantage if carrying the device is inconvenient. For example, unlike the iPad, the Streak did fit into my shirt and pants pockets. But its 6-inch by 3-inch case was still too large for me to feel comfortable carrying it in those pockets or even on my hip, affixed to my belt. Some women I showed it to, though, said they'd have no problem carrying it in their purse.

Most of the handful of staffers here at Consumers Reports to whom I showed the Streak thought it too large to comfortably hold up to the ear and use as a phone. I agree.

Keyboard and touchscreen. The Streak's on-screen keyboard (it has no built-in mechanical one) offers a full QWERTY array accompanied by a numeric keypad. So typing a mix of letters and numbers requires fewer key presses than on the iPad, which uses a secondary keyboard for digits.

However, in landscape orientation, the Streak's keys are roughly one-quarter the size of the iPad's and spaced more closely, which made them tougher to single out with my fingers.

The Streak's touchscreen felt quite smooth and responded pretty snappily whenever I performed a pinch-to-zoom on Web pages in the browser. As with the iPad, surface smudges from my fingers were quite noticeable.

Software. The sample I used came with Android 1.6, which is nearly two versions behind the 2.2 version of Android now being rolled out to smartphones. One of the limitations of 1.6 is that I couldn't pinch-to-zoom when using Google maps; I had to click an on-screen plus or minus.

There was also a bundled copy of QuickOffice, an app that lets you read Microsoft Office documents and PDF files. However, it was version 2.0.213, while the latest version in the Android Market, priced at $9.99, is 3.2.40. I don't know if the Streak that ships to consumers will bundle the later version.

One feature of the Streak's e-mail app that I liked: It inserts a "Sent from my Dell Streak" signature line into outgoing messages. You can, of course, remove that line.

Hardware. The Streak had most of the features you'd expect on an Android smartphone, such as Bluetooth, a rear-facing still and video camera (5MP), and a microSD card (16GB). There's also a front-facing camera, though I'm not sure if you can use it for videoconferencing.

And there's just one data port, a 30-pin outlet that resembles the iPad's. It's used for charging, tethering to a computer's USB port, and (according to the Streak user manual) playing 720p video through an HDMI display device with the help of a 30-pin home dock. (No details yet on the price and availability of that dock.)

Overall, I enjoyed using the Streak. Due to its larger size, the display is easier to work with than that on any smartphone I've seen. Nevertheless, in landscape orientation, I did have to scroll horizontally to read the standard version of major sites like CNN, eBay, or the New York Times, which I didn't have to do with the iPad.

The above observations are my first impressions and by no means comprehensive. We'll have more information once we purchase and test a retail version of the Streak more fully.