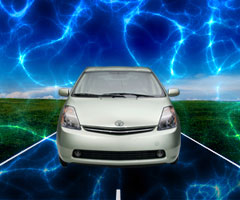 Some concern has been raised about the possible health effects of electromagnetic field radiation, known as EMF, for people who drive in hybrid cars. While all electrical devices, from table lamps to copy machines, emit EMF radiation, the fear is that hybrid cars, with their big batteries and powerful electric motors, can subject occupants to unhealthy doses. The problem is that there is no established threshold standard that says what an unhealthy dose might be, and no concrete, scientific proof that the sort of EMF produced by electric motors harms people in the first place.

Taken together, the many studies of EMF radiation and human health have been inconclusive. A major analysis of study results, published by the National Institutes of Health in 2002, said that "the overall scientific evidence for human health risk from EMF exposure is weak."

That hasn't stopped the debate. While studies continue, so does a highly charged argument on Internet forums and elsewhere, between those who see serious risk and those who dismiss such claims out of hand. Without taking sides, we conducted a study of our own, not to settle the question about human health risk but to measure EMF levels in the hybrid cars in our test fleet. We took readings from five hybrids and eight conventional vehicles.

To conduct our measurements we used a sophisticated three-axis ELF/Magnetic Field meter. That gave us readings in milligaus units, the commonly accepted measure for magnetic fields. We measured EMF levels on all 13 vehicles under the same conditions. We took measurements at the driver's right foot, knee, waist, and head when idling and driving around our simulated stop-and-go city-driving course, and while accelerating from 0 to 60 mph.

Here are some highlights from the tests:

We can't say whether the EMF levels we measured have any significance to people's health or not. Even the highest reading we got, 30 mG in the Cobalt, doesn't seem that high in the grand scheme of things.

Some may raise a specter of doubt, though, since part of the electric and magnetic fields in hybrid cars come from an alternating-current motor rather than the presumably less threatening direct-current used in conventional cars. To get a sense of scale, though, note that users of personal computers are subject to EMF exposure in the range of 2 to 20 mG, electric blankets 5 to 30 mG, and a hair dryer 10 to 70 mG, according to an Australian government compilation. In this country, several states limit EMF emissions from power lines to 200 mG. However, there are no U.S. standards specifically governing EMF in cars.

In this series of tests, we found no evidence that hybrids expose drivers to significantly more EMF than do conventional cars. Consider this myth, busted.

Visit our guide to alternative fuels and guide to fuel economy.