What does "organic milk" mean? (And other dairy terms) 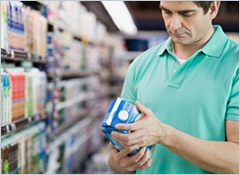 Earlier this year, the Department of Agriculture clarified the amount of time cows that produce organic milk must spend grazing on grass. By July 2011, they must have year-round access to the outdoors, access to pasture during the grazing season, and a specified minimum intake from pasture grown without synthetic herbicides and pesticides. They also must not have been treated with hormones or antibiotics.

Can people taste the difference between oragnic and non-organic versions? To find out, the testers at Consumer Reports bought eight brands of 2 percent milk, four conventional and four organic; poured samples into cups; and had 112 employees taste all the milks. The staffers were no better than random guessers at telling which were organic. That's not surprising, because feed and pasteurization type are apt to play a big role in taste.

Here are other terms to know when you're in the dairy aisle:

Whole milk. It has slightly less than 4 percent fat. One cup has 150 calories, about half from fat, plus vitamin D and about 300 milligrams of calcium. Whole, reduced-fat, and skim milk all provide similar amounts of protein, calcium, and vitamin D.

Nonfat or skim. A cup has 80 calories, none from fat. And how does a company create fat-free half-and-half? By adding stuff such as corn-syrup solids, artificial color, and sugar to nonfat milk.

Raw, aka unpasteurized. Because raw milk can harbor harmful bacteria, the Food and Drug Administration recommends against drinking it. (Learn more about raw milk.)

rbGH. Recombinant bovine growth hormone is an artificial, genetically engineered drug designed to increase milk production (by an estimated 10 percent). Its use was approved by the FDA in 1993. Most industrialized nations and all 25 members of the European Union have not approved its use because it can sicken cows. (And Consumers Union, the nonprofit publisher of Consumer Reports, has said that rbGH shouldn't be allowed in the U.S.)

Tryptophan. It's an amino acid in milk that the body turns into sleep-promoting serotonin. Whether there's enough in a glass of milk to aid sleep is debatable.

Soy milk. Plain soy milk has about a third fewer calories than whole milk but similar levels of calcium, protein, and vitamin D; negligible saturated fat; no cholesterol; and no lactose. If not labeled organic, it probably contains genetically modified soy.

Sell by. Milk should stay fresh for two to five days after this date, according to Cornell University's Department of Food Science, but once opened should be used as soon as possible. Unopened ultrapasteurized milk in sterile (aseptic) packaging can last several months unrefrigerated, but once opened, drink it within 7 to 10 days. The ideal temperature for storing milk is between 34° and 38°, Cornell says.

Source. You can find out where the milk you buy comes from by going to www.whereismymilkfrom.com and typing in a code from the carton.