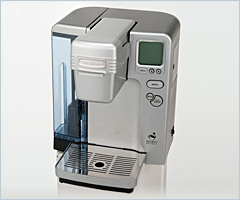 A single serving of coffee doesn't sound as lonely as soup for one. Still, coffeemaker manufacturers are trying to add cachet to the cup by making their pod machines seem as trendy as an iPod.

Having successfully wooed Europe on pod coffeemakers, according to today's Wall Street Journal, manufacturers such as Nestlé, Kraft Foods and Green Mountain Coffee Roasters are waging an advertising war over you in time for the holiday season. The pitch? That people would rather brew coffee at home than hit the local café.

"It's a fast-growing market and the potential is huge because many [U.S. consumers] haven't heard about the single-serve concept," Frederic Levy, president of Nespresso North America, a single-serve brand told the newspaper.

We're all for brewing at home, which can save you hundreds a year. But even if you prefer the speed and selection of a pod coffeemaker over a traditional drip machine, the pod coffeemakers we recently tested varied considerably in brewing speed, temperature, cup-size consistency, and other factors.

One criticism we've made of pod coffeemakers in the past is that some lock you into buying their own brand of coffee, tea and cocoa, which can drink up some of your savings. Some models we tested, including the $250 Breville BKC700XL, have a little basket—shaped like a K-Cup—that lets you put in your own coffee. (A coarse grind appropriate for a French-press machine works best.) And if you've got a different brand of single-serve coffeemaker that takes K-Cups, you still can add your own coffee with a reusable filter like that from Keurig.

Coffee klatch. There's no hype in our coffemaker buying advice. And subscribers can view our Ratings for pod coffeemakers, drip machines, and espresso makers.