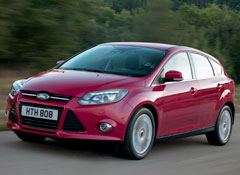 Although the redesigned Focus doesn't go on sale in the United States until spring 2011, Ford has released basic pricing information. The 2012 Focus S sedan starts at $16,995 and the range peaks with the Focus Titanium hatchback at $22,765, before destination charges.

The 2011 Focus is based on a global platform that will be used for about 10 models. In the U.S., the Focus will be powered by a 2.0-liter, direct-injection four-cylinder engine teamed with a five-speed manual or six-speed automatic transmission. Ford says that features such as active grille vents and electric steering have been added to eke out more mpg, though EPA fuel economy estimates have not been released yet. Other available features will include push-button start, parking sensors, and a semi-automatic parallel parking system that can steer the vehicle into a parking spot. Ford has also announced a new sporty version, the ST, which builds on the spirit of the long-gone—but fondly remembered—Focus SVT. The ST five-door hatchback will be turbocharged, producing 243 hp from its 2.0-liter, four-cylinder engine.

Ford has also committed to building an electric model in 2011.

There are a number of a la carte options and bundled packages offered, including upgrades with Sync and MyFord systems. To encourage pre-orders, Ford is offering a $500 "Technology" rebate.

View more images of the Ford Focus in our New Car Preview.