Are the new airport scanners safe? 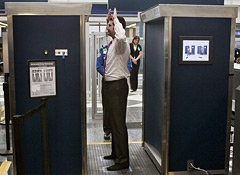 Some experts think radiation from these devices
might pose health risks.

If you haven't seen the new screening machines that are popping up at U.S. airports, chances are you will soon. The Transportation Security Administration (TSA) is replacing most metal detectors with imaging devices that reveal items hidden underneath passengers' clothing. But some experts worry that the new machines could expose travelers to health risks. And there are obvious concerns about privacy issues, too.

There are actually two types of scanners, both of which require you to step into a booth and raise your arms. Millimeter wave machines use electromagnetic waves to create an image of the body, while the more controversial backscatter devices beam low-energy X-rays to produce a picture. The government says the radiation emitted from those devices is minimal, equal to the natural exposure during 2 minutes of flying, though some research suggests it's higher.

Because the backscatter machines use low-energy X-rays, most of the radiation is absorbed by the skin and doesn't penetrate the body, as medical X-rays do. But some experts think that could raise the risk of skin cancer or sperm mutations, especially in frequent flyers.

Other concerns involve cancer patients, children, pregnant women, and anyone with a compromised immune system, all of whom are more vulnerable to radiation risks. But perhaps the biggest fear about using X-ray scanners at airports is the possibility of a software glitch or operator error that exposes passengers to excessive doses of radiation.

Although the TSA says the scans are safe, you're allowed to skip them and pass through a metal detector instead. But if you choose that option you'll be subject to a hand search, which can take extra time. And some people consider them to be more intrusive.

You might encounter resistance from airport screeners when declining to be scanned, so print the FAQs from the TSA's website, which state that you have that right. You can also ask at the airport if the device uses the more worrisome X-ray technology.

—Susan Stellin, contributing writer and author of "How to Travel Practically Anywhere," a guide to planning and booking travel.

Read more about how to avoid unnecessary exposure to radiation and how to travel safely. And we'd like to hear from you: Have you used one of the new scanners, or asked to skip it and go through the metal detector instead? If so, tell us about your experiences.