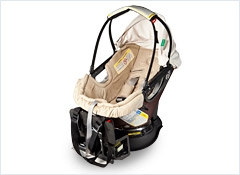 The Orbit G2 can be purchased ($400) with the seat and vehicle base alone or as part of a "stroller travel system" ($900)—the seat snaps into a stroller frame or latches into a base in a vehicle. The original Orbit Infant System included an infant seat, base and a stroller and sold for $900. The seat could not be purchased separately. This original system was rated a Don't Buy by Consumer Reports in August 2009 after the seat detached from its base in two of six simulated 30-mph frontal-crash tests conducted for us by an outside lab. 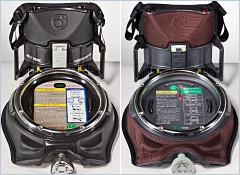 The Orbit G2 (left) has updated labeling on both
the base and seat with more information than
the original Orbit (right) to better inform users.

During our recent evaluation of the Orbit G2, we noticed some changes from the Orbit Infant System. The labels on the G2 have been updated and now include additional information to better guide parents and caregivers on correct installation and use (right). The bottom of the carrier appears to have been reinforced (below right). The bottom of the seat has been thickened and there are additional ribs in the area of the feet that engage the base (bottom right). There were no separations of the carrier from the base in any of our simulated crash tests of the G2.

Joseph Hei, co-founder and president of Orbit Baby, said the changes in the seat were made to allow the Orbit G2 to meet certification standards in as many countries as possible, including Canada. "Typically, you'd have to switch seats when crossing into Canada," Hei said. "That wasn't easy to do. The goal of the changes noticed by your testers was international certification." 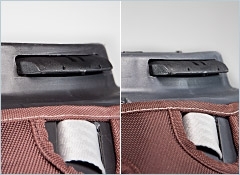 The plastic at the bottom of the Orbit G2 (left)
is thicker than on the original Orbit seat (right).

Hei noted that child car seats in general are often installed incorrectly, and for this reason Orbit Baby put a lot of work into revising instruction manuals and labels for the seat. "From our point of view, the most important changes were in the instructions and labeling," he said.

Orbit Baby disputed our Don't Buy Rating for the original Orbit Infant System. The company said it ran additional tests on the infant car seats and reported that all seats met federal safety standards, and that there were no seat separations. 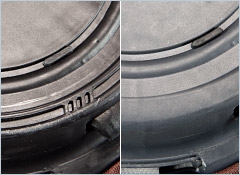 Ribbing added to bottom of the Orbit G2 (left)
was not present on the original Orbit (right).

The National Highway Traffic Safety Administration (NHTSA) confirmed that in its crash tests of the Orbit Infant System, the seat withstood the government thresholds for frontal crashes and is compliant with Federal Motor Vehicle Safety Standard (FMVSS) 213. Orbit Baby also noted in August 2009 that the company had never received a report of a child being injured while in an Orbit Baby seat. To learn more, read "Why Consumer Reports Still Says Don't Buy the Orbit Infant Car Seat."