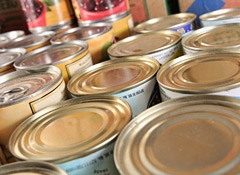 People in the U.S. have more exposure to bisphenol A (BPA)—a chemical linked to reproductive abnormalities, certain cancers, diabetes, and heart disease—than other studied populations, according to a new report from the Canadian Medical Association.

The analysis included prior studies that had measured exposure to the chemical, which is found in clear plastic bottles and the linings of beverage and food cans, based on urine tests conducted in Canada, China, Germany, and the U.S. The levels of BPA in people in the U.S. were higher than any of those countries, and about double those found in Canada. Consumer Reports' December 2009 tests of 19 name-brand canned foods, including soup, juice, tuna, and green beans, found that almost all contained some BPA.

"I personally am flabbergasted to see that BPA levels in the urine of Americans are twice as high as levels found in Canadians," said study author Laura Vandenberg, Ph.D., of the Center for Regenerative and Developmental Biology at Tufts University, in an interview with Consumer Reports. Since there are no known differences in the rates of canned-food consumption between Americans and Canadians, Vandenberg said "it will be important to examine all sources of environmental exposure to find a reasonable explanation for this significant difference between two populations that are otherwise quite similar."

The study notes, for example, that BPA has been detected in samples of air, dust, sewage, and water, and that "several studies point to possible exposure from contact through the skin or mouth with the thermal papers used to make a variety of products such as cash register receipts."

The study says that exposure to BPA in the U.S. has risen over the last two decades. Urine levels found in samples collected in the U.S. between 1988 and 1994 were similar to those reported recently in Canada, so additional research is needed to determine whether sources of BPA exposure in this country changed during that time but did not change in Canada.

Children and adolescents tend to have the highest concentrations of BPA. That might be because they process the chemical differently, or because they're exposed to more BPA-containing products, such as toys and baby bottles. They also typically eat more than adults relative to their body masses and therefore may have greater exposure through canned food.

Canada classified BPA as a toxic substance and banned BPA in baby bottles in October 2010. The European Union banned it for that purpose effective March 1. Some states in the U.S. have also banned it in baby bottles, as well as in certain children's products. U.S. regulators are studying BPA's health effects, and the U.S. Food and Drug Administration has said it supports efforts to produce baby bottles and can linings made without BPA, but it has not banned its use in those or other food-contact products.