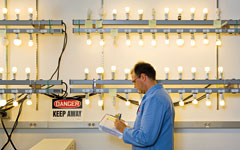 For all the concern over mercury in compact fluorescent lightbulbs, and the importance of preventing that mercury from being released into the environment, only two percent of consumers recycle CFLs, according to the Association of Lighting and Mercury Recyclers, a trade group.

The figure is an estimate based, in part, on a survey of ALMR members, and Paul Abernathy, the group's executive director, says the members handle about 85 percent of all recycling. "Nowhere in the country is there a policy or program that compels people to recycle CFLs. Compel—as in you get in trouble or are rewarded," says Abernathy. "Some states mandate it, and it's illegal to toss CFLs in the garbage, but I've never seen it enforced."

The amount of mercury in CFLs has dropped in recent years—all of the bulbs in our recent lightbulb tests had significantly less than 5 mg.—but mercury is still needed to ignite the light. The mercury is only released when CFLs break, and they often break when tossed in the trash, landfill or incinerator.

While the U.S. Environmental Protection Agency doesn't track recycling efforts, NEMA, the trade association representing lightbulb manufacturers, also paints a dreary landscape. "We have no survey data, but would agree that recycling rate of CFLs is low," says Joseph Higbee, director of communications and marketing for NEMA.

With no federal law mandating the recycling of CFLs, some major retailers, with the notable exception of Walmart, collect the used bulbs and pay for the recycling. It's good business, but it's also expensive. Home Depot says it recycled about three million CFLs last year; Lowe's, around 22 tons or 175,000 CFLs. Ikea sent 12 tons to the recyclers in its latest fiscal year, and although some Ace Hardware stores recycle these bulbs, the numbers aren't tracked. In addition to these retailers, you can find a local recycler by calling your sanitation department or visiting www.earth911.org.