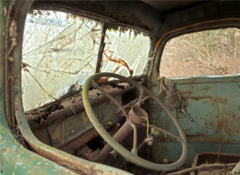 Here's something to chew on the next time you're chowing down while behind the steering wheel. You're eating in a spot that's roughly nine times dirtier than a public toilet seat.

That's what microbiologists at Queen Mary University of London, England found when they did a small research study for B&Q, a UK-based home and garden retailer.

While most of the bacteria were unlikely to cause health problems, some cars were found to play host to a number of potentially harmful bacterial species.

Those "potentially harmful" bugs include Bacillus cereus, which can cause food poisioning, and Arthobacter—bacteria often found in rotting organic matter.

The reason British cars have become such bacterial breeding grounds is fairly obvious: Driver neglect. According to the study, 37 percent of British drivers said they couldn't be bothered with cleaning their cars while three in 10 (about 28 percent) said they'd rather have their partner do it.

Most people clean their homes but many are neglecting to clean their cars and are driving round in vehicles which resemble a rubbish bin. A car is the perfect place for germs to breed, especially if you eat in it and leave litter or uneaten food around. To avoid potential health risks it would be wise to regularly clean your car both inside and out.

When was the last time you cleaned your car's interior? For tips, check out:

And tell us what you think. Are you surprised or concerned over this study? Weigh in below.