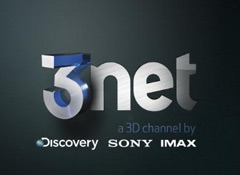 3D TV owners who subscribe to a TV service (such as DirecTV) that offers the new 3net channel will get a bump in the amount of 3D content they can watch next month, when the network rolls out a strong slate of new 3D programs.

Among the offerings that debut in June from 3net—a full-time 3D network from Discovery, Sony, and IMAX—are a mix of new episodes of original 3net series, in categories such as nature and animals, action/adventure, culture, and entertainment.

In a statement announcing the new programs, 3net President Tom Cosgrove said the June lineup will drive in-home 3D adoption and combat "the misconception that in-home 3D offerings are scarce." Although it launched only three months ago, 3net says it will offer the most extensive library of native 3D content in the world by the end of 2011.

The company is also currently in production on a 3D series about the Civil War, which is slated to air this fall.

If you're a DirecTV subscriber who's been watching the 3net channel, let us know what you think about its shows. We'd also like to know what other TV service providers are offering 3net.