Airlines try to spice up pre-flight safety run through 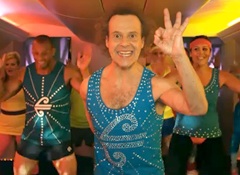 Airlines are revamping their delivery of the pre-flight safety routine to try and get passengers to pay attention. The announcement before each flight is required by the Federal Aviation Administration, and covers, among other items, seat belts, exits, and how to use your seat cushion as a flotation device.

Few passengers are paying attention, and it turns out flight attendants can be just as bored by the drill. Some airlines rely on video, but that doesn't mean the message is more entertaining. Recently, however, more and more airlines have been having some fun with their safety reminders. Here is a roundup of some of the more creative endeavors, as reported by the Wall Street Journal.

For its part, Southwest Airlines lets staff personalize the run through with jokes, funny asides, and observations that aim to catch the attention of passengers. Southwest founder Herb Kelleher told the Wall Street Journal that a man once called him to say the announcements weren't "appropriate."

The Federal Aviation Administration actually pressured Virgin to lay off the sarcasm "for clarity of message," according to the Wall Street Journals report of this phenomenon.

Have you experienced any eye-catching safety videos or routines in recent travels?

In the Name of Safety, Airlines Can Dance if They Want To [Wall Street Journal]