Bats get a bad rap, says 'Year of the Bat' ambassador 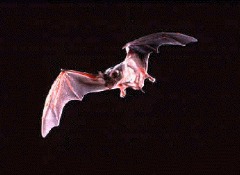 Did you know that it's the Year of the Bat, a time to honor the "mysterious and misunderstood" mammal. A website devoted to bat celebration and conservation proclaims, "The world's only flying mammals are exceptional, delightful, fascinating and likeable." Maybe so, but it's not so delightful to find a bat where it's not supposed to be—in your home.

True, bats are champs at insect control, but a very small percentage also carry rabies, according to the Centers for Disease Control. For that reason, any bat found inside the house should be removed carefully. If someone has been bitten or was sleeping in the room where the bat was found, the animal should be saved and tested, and you should seek medical advice.

If you find a bat in your home and know that it hasn't come in contact with anyone, you can try to let it escape by confining the critter to a room. Close all doors and windows leading out of the room except those to the outside. The bat will probably leave on its own. If the animal lingers, here are the steps the CDC recommends to capture a bat:

Rabies is a fatal disease. That's why health agencies take bats so seriously. Even though rabies in humans is rare, the CDC reports that of the 19 naturally acquired cases of rabies in humans in the U.S. from 1997-2006, 17 were associated with bats. Bats are nocturnal so a bat that appears in daytime, appears weak or unable to fly, and makes unusual noises may have rabies. If you see one, call animal control or a wildlife conservation agency.

But as many campers know, bats can be fun to watch from afar. There are plenty of Year of the Bat events planned around the globe. Real fans may want to reserve a spot for an August visit to the Bracken Bat Cave, the summer home of the world's largest bat colony in Austin, Texas. It's no accident that Dr. Merlin Tuttle, the Honorary Ambassador for the Year of the Bat, is from Austin. Tuttle, a noted wildlife photographer and conservationist, says that bats are among the most "intensely persecuted mammals" and he'd like to change that. "Scary media stories notwithstanding, bats are remarkably safe allies  and delightfully likeable masters of our night skies."