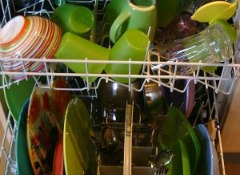 The IMAX movie Journey into Amazing Caves shows scientists exploring remote caves, Arctic glaciers, and Mexican rainforest beds to find extremophiles, organisms that thrive amid conditions too extreme to support most life. But a team of scientists has discovered you don't need to go to the end of the earth to find these microbes—you just need to open your dishwasher.

That's what a team of scientists based primarily at the University of Ljubljana, Slovenia, found when they sampled 189 dishwashers installed in homes in six continents, including 13 in North America. While the rubber door seals of 102 models yielded numerous yeasts and other fungi, two organisms in particular proved especially tolerant of wide ranges in temperature, PH, and salinity—the black yeasts Exophiala dermatitidis and E. phaeomuriformis. Both have been known to cause systemic disease in humans and can colonize the lungs of cystic fibrosis patients.

The study, published in the journal Fungal Biology, suggests that energy-efficiency measures such as lower temperatures and less aggressive detergents, along with a nutrient source (food from the dishes) and large amounts of water, could be helping microbes flourish. And what survives the dishwasher can reach the dinner table as a biofilm over dishes, utensils, and other items.

"House appliances are perfect places to actually accelerate the evolution, to make them develop more quickly—and into really pathogenic forms," said Nina Gunde-Cimerman, PhD, a co-author of the study and chair of Molecular Genetics and Microbiology at U. of Ljubljana. "The conditions we found are also very similar to what they need in order to become human pathogens. It's a combination of factors like you'd never find in natural environments because they aren't found in nature. But in these appliances, they're present."

So far, the researchers have found no relation between drying with electric heat versus ambient temperature with the dishwasher door open. They have also seen no patterns relating to type of detergent or the cleanliness of water coming into the home. What they have found is that water higher in calcium carbonate, a chief ingredient of hard water, tends to help invasive microbes better resist attack from the human immune system.

In addition to further research on dishwashers, the same team eventually hopes to sample front-loading clothes washers—complaints about which have spawned lawsuits—and other home appliances. But in the meantime, the researchers can offer no solution other than, perhaps, washing dishes by hand. It's hardly a comforting conclusion for dishwasher owners, let alone the industry's trade group, the Association of Home Appliance Manufacturers, which so far has declined our request for comment on the study.