In a disaster, favor texting over voice calls 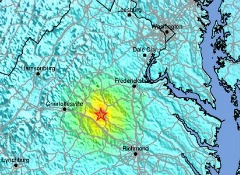 In the aftermath of the earthquake that hit parts of the U.S. and Canada yesterday, it's worth emphasizing that texting may be the most reliable way to stay in touch during a natural disaster.

There were numerous reports of service problems after yesterday's quake. In fact, the FCC said it is "assessing a significant disruption to cell service due to the quake and will be looking at ways to improve communications during emergencies," reported MSNBC.

"The networks worked intermittently along the East Coast when customers tried to make phone calls soon after the quake," said The New York Times. "Text messaging and data connections did not seem to be affected to the same degree."

In past disasters as well, phone owners have had more luck sending and receiving text messages than they have in successfully placing or receiving voice calls. That may be because the data demands of texts are relatively smaller, and they can thus better find their way on networks that are stressed by overuse as people seek to reach loved ones, or by damage to their infrastructure from the disaster.

Use of texting as a primary communications mode, of course, requires that the people you might seek to reach, or vice versa, are versed in how to text and read texts. If you have a family member who rarely or never texts, think about making a texting tutorial part of your family's disaster planning.

You might also want to consider disaster plans when it comes time to choose a new phone for those folks. Although they may routinely text, think about getting them a phone that has a full QWERTY keyboard. Those who don't text often generally struggle to use the numeric (that is, non-QWERTY) keypads of some very basic cellphones, which can require multiple presses to yield letters.

Sending texts does not require any additional service plan from the carrier, even for those who have basic voice-only plans; they'll simply be billed for each text they send or receive. (Those who begin to send any significant number of texts should, however, consider a texting plan, which offers lower rates per message than does a la carte pricing.)

One other tip if you're concerned about ultimate readiness for a disaster: Consider your phone's battery needs for a scenario in which the power goes out for a significant time. You might want to invest in either an extra battery (expect to pay $15 to $50 for one), so that a fully charged battery is always on hand. Other options for extending your phone's run-time in power outages include battery-boost devices that rapidly top up the battery and solar-powered chargers; both of those options start at $10 or so.