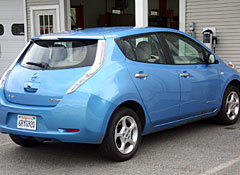 After five months of testing and living with the Nissan Leaf, the first mass-market all-electric car, we have published the road test, ratings, and full track report online. It will also be featured in the November issue of Consumer Reports magazine.

Since it's not sold nationwide yet, we bought our Nissan Leaf in California this past April and had it shipped to our Connecticut test facility. The Leaf cost us $35,430, but it's eligible for a $7,500 federal tax break and additional local incentives. In California, for instance, the Leaf can become a $22,000 car due to the available subsidies.

Seen just as a car, we've found the Leaf a very pleasant hatchback with quick off-the-line acceleration, a quiet cabin, comfortable ride, and easy access. But there's an elephant in the room, or actually two elephants: limited range and long charging times.

In ideal conditions, meaning mild weather and gentle driving habits, we were able to get around 90 miles of cruising range. On cold days, with the heater running, the range dropped to about 60 miles. Typically, we got about 75 miles from a full charge. In most cases the car returned to base with 10 to 15 miles left in reserve. (At 9 miles left you get a warning that the battery is low.) It then took six hours to recharge using a 240-volt charging station. A typical charging session consumed about 22 kilowatt-hours of juice. (The battery's capacity is 24 kWh.) Without a 240-volt (aka Level 2) charger on hand, the wait can be long: 16 hours using 120-volt power.

While the Leaf has a dashboard display that shows power consumption in terms of miles per kWh, we couldn't rely on that for our testing, just like we don't rely on an average mpg trip computer display in a regular car. To measure its energy efficiency, we put the Leaf through exactly the same tests as we use for gasolie-powered cars. On average we consumed 3.16 miles/kWh. Using a standard formula developed by the EPA, that was the equivalent of 106 mpg.

We rented a device that allowed us to tap into the car's diagnostics port and showed us exact consumption. We also correlated what the car consumed on-board to what it took to charge and established that charging efficiency is 85 percent. In other words, 15 percent of the electricity you charge goes to waste.

With electricity priced at the national average of 11 cents/kWh, the Leaf's running costs are only about 3.5 cents a mile. But even if your electricity were twice that price, you would still come out ahead of, say, a Toyota Prius, which costs 8.6 cents a mile at today's fuel prices.

We think the Leaf is a milestone. You give up nothing in performance or practicality compared with other small hatchbacks, but gain in acceleration and quietness. Clearly, you can't easily take it on a long trip, especially an unplanned one, so it may not be the right choice for a single-car household. But so long as you can accept its limitations, the Leaf is an enjoyable car to buzz around in, as well as a sensible and economical choice.