Want to save on microwave popcorn? Try brown bagging it 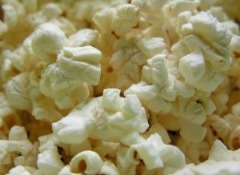 Microwave popcorn is a tasty snack, but it's not always the healthiest. A single serving might contain 15 grams of fat and 400 milligrams of sodium, and it's pretty easy to polish off several servings, especially on movie night. Low-fat versions improve the nutritional content, but there's another way to go, and it could save you money on top of the extra calories: Make your own microwave popcorn using plain kernels and a brown paper bag.

There's no shortage of recipes on the internet for brown bag popcorn, and they all more or less follow the same process. Get a bag, add a few tablespoons of popcorn kernels, fold the top of the bag over a couple times, and nuke it for 2 to 3 minutes, or until there's a few seconds between pops. Some recipes suggest mixing the kernels in a teaspoon of vegetable or olive oil before popping, but that's optional, as is the salt. You can also experiment with other flavorings, such as chili powder, Parmesan cheese, or cinnamon.

If your household goes through a lot of microwave popcorn, making your own can lead to real savings. In one online comparison, store-bought microwave popcorn worked out to $3.50 per pound while the homemade version cost just 50 cents per pound. But the real savings are in the fat and sodium intake, which are down around nil if you forgo the oil and salt.

Don't own a microwave? The prospect of brown bag popcorn might not entice you into the purchase. But if it does, or if you're ready for a new unit, be sure to read our microwave buying guide and Ratings of several dozen countertop and over-the-range models.