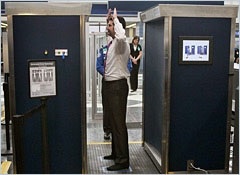 Full-body scanners that use X-ray technology for security screening purposes will be banned at Europe's airports because of radiation risks and concerns, said the European Union (EU) on Monday.

The scanners screen airline passengers for hidden explosive devices, hundreds of which were installed at airports across the United States after the failed Christmas Day attack in 2009 by the so-called "underwear bomber." Soon after the new full-body X-ray machines were unveiled, concerns were raised over the possible levels of radiation exposure during airport security checks.

The U.S. government has stated that the radiation emitted from those devices is minimal, equal to the natural exposure during 2 minutes of flying, though some research suggests it's higher. Last year, a paper published in the journal Employee Responsibilities and Rights, noted that frequent airline travelers face an increased risk of radiation even without the X-ray airport scanners.

Because the full-body machines use low-energy X-rays, most of the radiation is absorbed by the skin and doesn't penetrate the body, as medical X-rays do. But some experts think that could raise the risk of skin cancer or sperm mutations, especially in frequent flyers.