Cancer prevention for girls and boys: the HPV vaccine 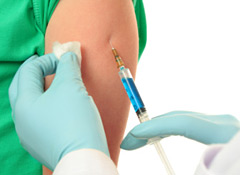 I knew it was more than a tragic coincidence when two of my friends, middle-aged men without the usual risk factors of tobacco and alcohol use, developed late stage (IV) tongue cancer, reportedly the identical condition with which actor Michael Douglas was diagnosed last year. Cancers of the mouth and throat are growing so quickly that experts in the medical and scientific community are calling this an "epidemic," for which middle aged men appear most at risk.

The likely cause is the human papillomavirus (HPV), which was already well-recognized for its association with genital warts and cervical cancer. Only a few years ago, in the 1980s, the rate of HPV found in mouth and throat tumors was around 16 percent, but during the 2000s it had ballooned to over 73 percent, according to an extensive review in the November 2011 Journal of Clinical Oncology. The authors of the study predict that by 2020, the number of HPV-related mouth and throat cancers will surpass those of cervical cancer, currently the focus of HPV vaccination.

So I was not surprised when a federal advisory panel recommended in October that along with young women, adolescent boys should get the HPV vaccine. In June, I had discussed the subject with my two teenage sons and prodded their physician to consider giving them the vaccine. He didn't know it had been approved for boys, but was convinced after he reviewed the FDA reports. The link between the vaccine (Gardasil) and the prevention of HPV-related mouth and throat cancers is still under study, but the hope is that vaccinating boys will help safeguard them against these cancers and other HPV-related conditions and, thus help reduce transmission of the virus.

Two vaccines, Gardasil and Cervarix, are available. Both are recommended for girls and women ages 11 to 26. Gardasil also protects against most genital warts and was approved for this use for boys and men ages 9 to 26 in 2009. Some parents have shied away from having their children vaccinated, on the theory that doing so might encourage premature sexual activity or even promiscuity. If you are among those who feel this way, then that is a factor you will likely weigh in the decision. But as a parent and a physician I can tell you I have seen little or no evidence that vaccination affects young people's sexual activity one way or the other.

Whatever your feelings about that issue, you should definitely ignore another recent allegation that the vaccines are dangerous, and can even cause brain damage. This was quickly quashed by the American Academy of Pediatrics and other medical experts. Clinical trials have found that the vaccine is generally well tolerated and at least as safe as or safer than other vaccines routinely administered to kids.

At least 50 percent of sexually active people become infected with HPV at one point in their lives, and it takes just one partner to transmit the virus. It's too late for most adults like my friends to be served by a vaccine, but it's not too late for our kids. So to me, at least, choosing this vaccination for your son or daughter seems like a no brainer.