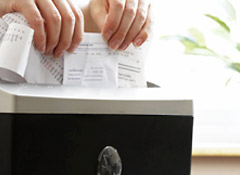 A good paper shredder can tear a personal document to thousands of pieces which makes recovery nearly impossible, right? Sure. But a team of computer programmers in San Francisco recently won $50,000 for beating the U.S. Defense Department's challenge: Recreate a note that was torn into more than 10,000 tiny fragments.

Still, while the team proved successful at what's often thought of as mission impossible, the programmers are quick to point out consumers shouldn't automatically dismiss the usefulness of paper shredders. Otavio Good, one of the winning team members told New Scientist:

The challenges that DARPA gave us were actually simple compared to if you have a bin full of lots of shredded pieces of paper. Reconstructing these documents was not easy at all. I don't think you have much to worry about with your shredded documents.

Consumer Reports experts have long recommended paper shredders as an invaluable tool for consumers concerned about identity theft. And our recent test of nearly 20 models found all were able to successfully destroy sensitive documents and plastic credit cards. But four models—one each from Black & Decker and GoEcoLife, and two from Staples—topped our Ratings of paper shredders proving to be easy to use and speedy.
.

If you're shopping for a new shredder to help safely dispose of sensitive documents and materials, check out Consumer Reports Buying guide to paper shredders. We also offer basic safety tips in Shredding 101 as well as guidelines on How long to keep important documents and whether they should be stored at home or at a bank's safe-deposit box.

For more tips on how to protect your identity from data thieves and computer hackers, see Consumer Reports Guide to online security and our advice and Ratings of security software.