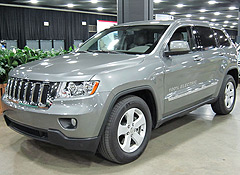 Electric power isn't just for little city cars like the Nissan Leaf and the Mitsubishi i. The vehicles of choice for us suburbanite Americans are SUVs. That's the conclusion reached by AMP, a Cincinnati, Ohio company that converts everyday vehicles to electric cars. (AMP competed in the Automotive XPrize with a converted Saturn Sky.) To that end AMP converted a Jeep Grand Cherokee and a Mercedes-Benz ML-class into EVs. These two SUV conversions will soon go on sale at a Cincinnati, Ohio dealership that carries both brands. Reservations are being taken now.

AMP's GCE (Grand Cherokee Electric) is based on the rear wheel drive Jeep. It relies on two electric motors powering the rear wheels. It uses a single-speed transmission, as most other EVs do. The battery pack is a 37-kWh unit that's good for about a 100-mile range. It's a large battery and some might expect a longer range but the GCE is a 5,000-pound vehicle as opposed to the Leaf, which weighs 3,400 pounds. Charging times are said to be six hours through a 6.6-kWh on-board charger using a 240-volt supply. The price is $57,400 before counting a federal $7,500 tax incentive. That sounds high, but it's aimed at fleets, some of which are obligated to purchase EVs and use grant money. In the short spin I took the GCE was quiet and responsive, with readily available silent power. Instrumentation is not quite EV style and free of whiz bang dazzling graphics. The range gauge is simply the same Full to Empty needle as in the conventional Jeep. 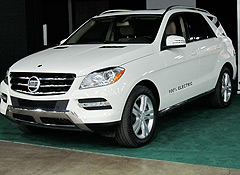 With the Mercedes ML, AMP left the entire running gear intact, the all-wheel-drive system, transfer case, 7-speed automatic and all. Unlike the GCE, there was no need to replace the steering rack because it's already electrically-assisted. It's the first modern all-wheel-drive electric vehicle, beating Tesla's Model X SUV to market. AMP did, however, go to the trouble of replacing the three-pointed star with their own AMP logo. The MLE is priced at $77,400. After deducting the $7,500 federal tax incentive, it costs about $10,000 more than its V6 version, putting the price on par with the sleek upcoming Tesla Model S. Range and charging times are similar to the GCE. The MLE is also the first EV to use a multi ratio transmission instead of a single-speed set up as in other EVs. As such the electric drive becomes more efficient at highway speeds. On my brief drive, the effortless torque in 3rd and 4th gears was terrific.

With both conversions, there where no extraneous whines or any noticeable roughness in power delivery; AMP seems to know how to convert vehicles to EVs. And while both the GCE and MLE are fundamentally fine vehicles, the thing is, no one will notice you're driving an EV, since unlike the Leaf or Tesla neither of them possesses a dedicated body style. Unless you tell them the price.

Check out all our coverage of new cars in Detroit.