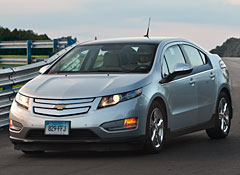 The National Highway Traffic Safety Administration (NHTSA) has closed its safety investigation into fires that erupted from three Chevrolet Volt battery packs after severe crash tests by the agency.

"Based on the available data, NHTSA does not believe that Chevy Volts or other electric vehicles pose a greater risk of fire than gasoline-powered vehicles. Generally, all vehicles have some risk of fire in the event of a serious crash," NHTSA concluded. The agency said it "remains unaware of any real-world crashes that have resulted in a battery-related fire involving the Chevy Volt or any other electric vehicle."

The first fire erupted three weeks after NHTSA conducted a side-into-pole crash test on the Volt, a more severe crash test than any standard tests other cars must pass (though simulating a not-uncommon type of crash in the real world). During the test, the structure of the collapsed car broke through to the liquid-cooled battery pack. The batteries were not discharged after the test, as General Motors protocol specified. The car was then rotated 360 degrees, slowly, to simulate a rollover. This allowed coolant from a burst coolant line to drain onto a printed circuit board on top of the battery pack, according to General Motors. Later, after the car was left out in the cold, the coolant crystallized, creating a short in the circuit that provided a path for the battery's energy to run away. This overheated the battery pack by allowing it to drain too quickly and caused the fire.

General Motors recalled Volts to beef up the car's structure surrounding the battery pack to reduce the possibility of intrusion and add safety systems to the battery coolant system.