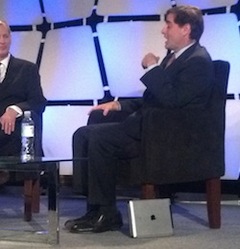 In less than a year, AT&T went from swallowing up T-Mobile USA for for $39 billion to owing T-Mobile's German parent company $3 billion in cash and another billion in spectrum because that deal slammed into the regulatory roadblock at the FCC and the Justice Dept. Speaking for the third year in a row at the Consumer Electronics Show, FCC chair Julius Genachowski defended his agency's actions against the deal.

"It was a reminder of the benefits and power of competition," Genachowski told host and President of the Consumer Electronics Association Gary Shapiro.

Shapiro countered that it may have been a reminder of the "power of government," asking how AT&T, one of the nation's largest companies with some of the world's best lawyers, could have misinterpreted the situation and thought it would be successful. Shouldn't the rules about what will pass merger muster be more codified and less fluid?

Genachowski said that the rules are fluid by design, because markets change all the time, and that antitrust law has worked for around 70 years, in part because of the flexibility given to regulatory bodies. He also points out that his commission makes annual competition reports on the state of the industries that fall under the FCC umbrella, so that companies like AT&T can get a feeling on just how much resistance a merger might face.

"So the way it works is that you make your decision, and whichever group doesn't win, they then sue?" asked Shapiro.

Genachowski said yes, but that the alternative is worse.

Of course, the main reason that AT&T wanted to buy T-Mobile was to acquire the smaller company's wireless spectrum. With increased customer demand and the growing number and variety of products -- from your washing machine to your wristwatch to your automobile -- spectrum is at a premium and quickly becoming a scarcity.

Thus, Genachowski used his platform at CES to push for Congress to sign off on incentive auctions for wireless spectrum that would realign spectrum and put upwards of $25 billion into the Treasury coffers.

However, as the expected March 1 vote on these auctions nears, there are a handful of proposals that Genachowski says could severely hamper innovation.

Because unlicensed spectrum does not contribute directly to the Treasury, there are lawmakers who don't want auctioned spectrum being used for unlicensed purposes. However, Genachowski points out that current uses of unlicensed spectrum -- everything from WiFi to garage door openers -- are leading the charge of wireless innovation in the U.S., thus creating jobs and allowing businesses to develop and create technology that can be sold to other countries. All of this would benefit the country more than the few dollars from selling spectrum licenses, argues the FCC chair.

"The value of every technology at this show goes up as the availability of bandwidth goes up," explained Genachowski.