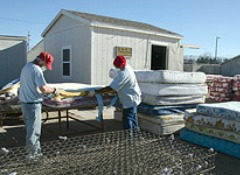 In Kansas, the bad guys are doing a good thing and next week federal authorities will visit the Hutchinson Correctional Facility to honor its inmates. The prison has been awarded a WasteWise award by the Environmental Protection Agency for keeping 1.5 million pounds of solid waste out of local landfills. Talk about rehabilitation.

Hutchinson is the only correctional facility that participates in WasteWise, a free, voluntary EPA program that helps businesses reduce their environmental impact and find cost savings through innovative waste reduction and recycling activities. Hutchinson's innovation is recycling mattresses. As the sole mattress recycler in Kansas, the prison has its inmates dismantle used mattresses and recycle the components.

"The bed springs are baled, and every six weeks it's all loaded on a flat-bed truck and sent to a place in Aurora, Colorado that recycles that," Dirk Moss, a prison spokesman, told HutchNews.com. "Some of the beds have wood frames, so inmates make outdoor furniture, chairs, foot-stools and planters."

The inmates also make quilts from remnants of used prison-issue jeans, recycle bottles, cardboard and other materials at the facility and compost organic waste. In Kansas the prison has been named the "No. 1 Green Team among 157 state agencies," reports HutchNews.com.

Taking mattresses apart is something we also do at Consumer Reports. In our last evaluation of mattresses, we cut through 11 firm mattresses to evaluate the padding and coils. For example when we compared a $2,250 mattress to one that cost $1,380 we found that the more expensive one had "650 coils that were 1-inch shorter and lighter in gauge, making for bouncier suspension." The less expensive one had "504 coils that were taller and heavier-gauge, making for somewhat stiffer suspension."

Consumer Reports doesn't rate mattresses because of the role played by personal preference and the fact that different store chains typically do not have the same models, but our readers have reported to us what mattress brands and stores they prefer.