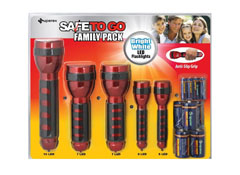 BJ's Wholesale Club has recalled about 41,000 of its LED flashlight and battery sets, because the flashlights can heat up, smoke or melt when turned on, posing fire and burn hazards.

BJ's has received two reports of incidents with the flashlights, including one that overheated and one that burned, causing a loud noise. One minor injury to a consumer's hand was also reported.

The recalled flashlight sets were sold for about $15 at BJ's Wholesale Clubs from July through December 2011.

For additional information, call BJ's at 800-BJS-CLUB, or visit www.bjs.com/contact. BJ's is contacting its customers directly.