What you need to know about water softeners 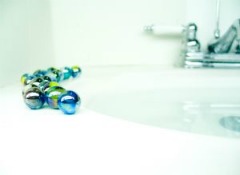 Hard water contains calcium, magnesium, and other dissolved minerals. The water is safe to drink, but it can leave a residue on showers and dishes, and deposits inside appliances that use hot water. Over time, that buildup can affect performance and efficiency.

Hard water can quickly clog a point-of-use filter, so you'll need to use a whole-house water softener. Ion exchange systems, the most common, work by replacing water hardening minerals with soft sodium ions.

The systems can cost several thousand dollars installed, though companies also lease them for $40 to $100 per month. Even if your water is very hard, the amount of sodium left behind in softened water should be low. But if you're concerned, consider choosing a system that uses potassium chloride. They're usually just as effective at softening water, though potassium chloride costs several times more than sodium chloride to replenish.

Other "no salt" water softeners are claimed to use magnetic force to change minerals' molecular structure so that they don't turn into scale buildup. The International Association of Plumbing and Mechanical Officials (IAPMO), with help from National Sanitation Foundation (NSF) International and other stakeholders, is developing a standard to measure the efficacy of magnetic softeners. Culligan and Kinetico, two softener manufacturers, have experimented with no-salt softeners but told us that they haven't yet found one that softens water as well as an ion exchanger.

Although Consumer Reports does not test whole-house water softeners, we do have new Ratings of water filters.