Apple TV gets a reboot: Should you care? 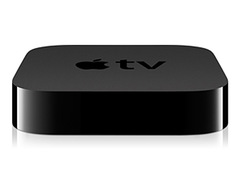 Perhaps a bit lost in all the excitement about the new iPad was the news that Apple also decided to tweak its Apple TV streaming media player. In addition to getting a new, faster processor, the big news was really that the latest version of Apple TV has a streamlined, icon-driven interface—available to second-generation Apple TVs as an upgrade—and it now supports 1080p video via its sole HDMI output. For Apple fans, another bonus was that despite the new features, the Apple TV's price held firm at $99.

We currently have a more in-depth evaluation of the revamped Apple TV and its competitors in the works in our streaming-media lab, but here's what we found during a preliminary look at the device:

Pretty on the inside. If you were expecting Apple TV to get a face-lift, you'll be disappointed. The small puck-shaped box remains unchanged, at least on the outside. I set up the player in my living room—connected to a 50-inch Panasonic VT20 1080p plasma—and I liked the fact that Apple TV's power supply is internal, so you have only a power cord to connect rather than a bulky wall-wart plug. Another advantage is that the internal power supply makes the Apple TV a bit heavier than the similar-size Roku XD box it replaced in my system; as a result, I found the heavy HDMI cable I use didn't pull the Apple TV out of place, something that regularly happens with the Roku.

On the face of the unit is a small white light that illuminates when the device is turned on. All connections—including an HDMI out, an optical audio output, an Ethernet port, and a Micro-USB slot (for service use only)—are housed on the rear of the player. There are no legacy video connections for use with older TVs without an HDMI input, however. Apple TV also has built-in 802.11a/b/g/n Wi-Fi for connecting to your home's wireless network.

I was able to connect the Apple TV to my 802.11n wireless home network without any problems, though the combination of the very small remote, my fatter fingers, and a long WEP password resulted in a few typing mistakes on the virtual keypad, thanks to the close proximity of the select button to the directional keys. But the silver remote control also remains unchanged from the previous generation, with Pause, Play, and Menu buttons; four directional keys; and a select button. You can also control the device using an iPhone or iPad with Apple's remote app. 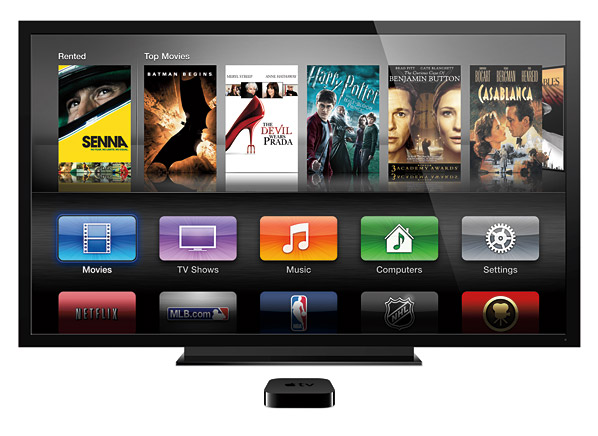 A new, colorful menu. If you want to rent or buy movies, TV shows, or music from iTunes, of course, you'll also need to sign into your iTunes account. Once the Apple TV boots up, you see a colorful, icon-driven menu that looks a bit like an iPad, though the actual functionality doesn't differ all that much from Apple's previous well-though-out, list-based interface. The new menu's square, cover-art icons, presented against a black backdrop, are more visually pleasing, and "top content" now appears across the top of the screen, depending on the type of content (movies, TV shows, music) you've selected.

Below that are icons for Movies, TV shows, Music, Computers, and Settings. You'll find the grid of icons for third-party services, such as Netflix and MLB.com, and Apple's own PhotoStream when you navigate further down the screen. Unfortunately, you can't reorder the choices to bring favorites closer to the top of the screen, and you can't remove seldom- or never-used icons from the interface.

If you click on one of the content icons, you'll get a new menu screen. For example, when you click Movies, you'll see options for Purchased, Top Movies, Genius, Genres, Search, and Trailers across the top of the screen. Given the short time of this test I, wasn't able to use Genius, Apple's recommendation engine that makes viewing suggestions based on your previous viewing choices, though the concept will be familiar to users of Netflix or Amazon. In general it seems as if the new interface requires fewer clicks for some operations, such as finding purchased content, than the old interface required. But if the new menu isn't dramatically easier to use, it's largely because Apple's interface was already among the best we've seen.

One advantage of staying within the Apple ecosystem is the ability to access movies, TV shows, and music from iCloud, Apple's cloud-based media storage system, via the Apple TV. Some movies are now available in 1080p, accompanied by 5.1-channel sound, and more are coming. But what I think really differentiates Apple TV from its competitors—apart from iTunes integration—is AirPlay, which lets you seamlessly stream content including 1080p movies from an iPhone, iPad, or iPod touch through Apple TV to your HDTV. And using a new a feature called AirPlay Mirroring, you'll be able to display the screen of your iPad or iPhone 4S on your TV.

HD is now Full HD. In addition to the new interface, the feature many of us will find the most exciting is Apple's move from 720p to higher-definition 1080p video support. As mentioned, in addition to Apple TV's ability to send 1080p to your TV, the iCloud service has been updated to support 1080p video content. (Netflix, of course, also offers 1080p streaming videos.) We will spend more time discussing video quality in our full evaluation of Apple TV, but based on the short time I spent viewing streaming videos, it appears that the quality of Apple's h.264 video should satisfy all but the most finicky viewers.

Just remember that the quality of the video streams will dynamically adjust based on the available bandwidth of your Internet connection, so your Internet speed will have just as much to do with what you see as the video output of the device. Using the bandwidth monitor on speedtest.net, I was regularly seeing speeds between 23 Mbps and 28 Mbps, well above the 8-Mbps minimum speed recommended by Apple. We look forward to a more detailed evaluation of video quality in our office test labs.

What's missing? While the new Apple TV has a lot going for it, I was a bit surprised that Siri voice control still hasn't made its way to Apple TV; maybe Apple is saving that feature for its much-rumored Apple TV HDTV. And I found the Apple remote a bit too small for my larger fingers when I had to enter text on the virtual keypad, but I imagine you get used to that over time. (And you can use either an iPhone or iPad as an Apple TV remote.) Also, with just a single HDMI video connection, Apple TV isn't an option for those with an older TV or A/V receiver that has legacy video connections. There are no SD card ports or USB slots for adding memory, though this is mitigated to a degree by the AirPlay feature.

But the biggest issue we have with new Apple TV is the same one we had with the previous version—that compared with its competitors, it still has less content from third-party services. Though the Apple TV does have Netflix, it lacks many of the popular services, including Amazon Instant Video, Crackle, Epix, Hulu Plus, and HBO go, that I now get with the Roku. And it lacks Vudu and Spotify, which I get from the Boxee Box. Apple may add more of these services in the future, but right now its content offerings, apart from iTunes, seem Spartan.

Bottom line. That said, where Apple TV really shines is as a conduit for bringing all the content you own on various iOS devices to your TV. As a result, our initial take is that the Apple TV primarily appeals to Apple-centric users who regularly live within the iTunes ecosystem. If you already live in Apple's world and have invested in iTunes content, getting an Apple TV is a no-brainer, unless you're looking for more third-party content. (And it doesn't seem to run hot, either.)

If you already own a second-generation Apple TV, though, it probably makes more sense to update your player to get the new interface, though you'll still have to live with 720p output. But those who aren't so Apple-centric can still get a lot more content choices with another streaming-media player, such as those from Roku and D-Link's Boxee Box. And in the case of some of Roku's boxes, you won't have to spend quite as much for it.

As mentioned, we're just about to start our comprehensive tests on the new Apple TV and several of its competitors. If you're in the market for a new streaming media player, stay tuned for our complete findings.