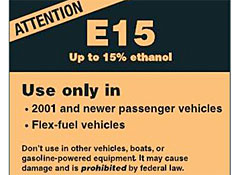 A 2010 decision by the Environmental Protection Agency (EPA) to allow the sale of gasoline blended with up to 15 percent ethanol (called E15) has come under fire from many groups. The latest is the Auto Alliance, an auto industry lobbying group representing several major automakers. The Alliance has published a new study saying that up to 5 million cars on the road today may be damaged by the higher concentrations of ethanol.

The study showed problems with damaged valves and valve seats in some car engines from the 2001 to 2009 model years, which could lead to the need for valve or cylinder-head replacement. Costs for such work could run from $2,000 to about $8,000, the study says.

Testing 16 vehicles, with eight different engines on a 500-hour durability cycle designed to simulate 100,000 miles of usage, the study showed two engines suffered damage to the valves or cylinder heads in the test, says Alliance spokeswoman Gloria Bergquist. Another engine fell out of compliance with emissions requirements when running on E15.

The 5 million-vehicle figure is based on examining the metallurgy and other component materials used in the damaged engines, then surveying automakers about how many engines they produced with similar materials.

The study also showed that the engines got poorer fuel economy running on E15, which mirrors our own findings that showed significant drops in fuel economy from ethanol blends. (Our tests were based on a vehicle running on E85, a blend of 85 percent ethanol with 15 percent gasoline that is approved for use only in specially equipped "flex-fuel" vehicles.)

The study was funded by automakers and by oil companies, both of which have a financial interest in reducing ethanol use. The federal Department of Energy has criticized the study for testing engines it says are known to have durability problems anyway, for failing to test the engines running E10 (the most common fuel sold in the U.S. today), and for not providing a baseline test of the engines running on straight gasoline (E-zero).

In 2010, EPA approved a two-part "waiver" allowing E15 fuels to be sold at stations across the United States for cars from the 2001 model year and later. E15 would be sold at specially labeled pumps alongside traditional gasoline, which may contain up to 10-percent ethanol.

Makers of small off-road engines, such as for lawn mowers, as well as boats, and ATVs, have objected to the waivers, claiming that consumers are likely to mix up the fuels and fill their equipment with E15, which isn't authorized for any non-road engines. Further, the manufacturers are concerned they could be held liable for warranty claims caused by excess ethanol.

So far, no gas stations sell E15, because no gas pumps have been certified to dispense the fuel.

Consumers Union, the advocacy arm of Consumer Reports, has advocated that EPA address the likelihood of consumers misfueling older vehicles and small engines with E15, as well as warranty concerns of owners of vehicles still under warranty that could incur higher costs of repairing or replacing an engine that is incompatible with E15.

See our guides to alternative fuels and fuel economy.