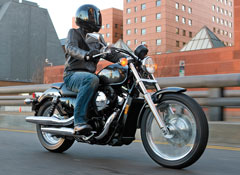 In major metropolitan areas, motorcycles appeal to some commuters for their ability to split lanes, thereby squeezing between slow-moving cars, as well as to save fuel and be easier to park. However, a new survey by the California Office of Traffic Safety (OTS) shows that drivers have mixed feelings about this practice, and more significantly, it highlights the dangers.

Released to support Motorcycle Safety Awareness Month, the survey explored issues of perceived legality and risk. It found among the 733 licensed car drivers surveyed that only 53 percent knew that lane splitting is legal in California. Further, 63 percent either somewhat or strongly disapprove of it. An OTS spokesman told us that California is the only state in which there is no law concerning lane splitting.

The OTS also surveyed 560 motorcyclists, almost half (45.9 percent) of whom ride just for pleasure on the weekends. About a third (30.8 percent) ride for fun and commuting, while about a fifth (18 percent) use their motorcycle to ride to work. When asked how far they ride on a typical day, the distances were great, averaging 72 miles. This was skewed by long-distances tourers, and the median was a still significant 50 miles.

Three-quarters (77.6 percent) of the group said they lane split when riding on the freeway, and this is done at a much higher frequency by men (79.7 percent) than women (48.6 percent).

So, we've established: It is legal in California. It is common. And now, the survey shows it is rather dangerous.

The bulk of the riders have never been in an accident as a result of lane splitting, but that still leaves 14.9 percent who either hit a vehicle or were they themselves hit. About half (45.2 percent) said they nearly hit a vehicle—no surprise given the tight squeeze often associated with lane splitting.

Of those involved in an accident, 34.6 percent said they struck a car side mirror, 11.1 percent had minor injuries, and 9.9 percent suffered severe injuries.

The vast majority report lane splitting when traffic is at a standstill (32.9 percent) or stop and go (31.5 percent).

This survey was the first of its kind conducted in California. It sheds interesting light on the practices and dangers involved in this activity. Clearly, lane splitting is common in California, and while drivers see it as dangerous, motorcyclists continue this time-saving technique despite the risks.

Going slow, being visible, and riding predictably can only help everyone's safety.

See our motorcycle and scooter buying advice to learn more about rider safety.