What you need to know about single-dose laundry detergents 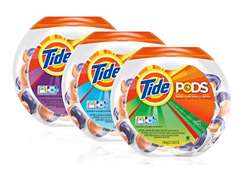 Single-use packs, similar to what we've seen in dishwashers for years, are the latest thing in laundry detergent. The packs make proper dosage a cinch for normal-size loads, and they're especially convenient for apartment dwellers, who might otherwise have to lug a hefty container to the local laundromat. But there are several drawbacks to consider, as our latest laundry detergent tests are finding.

For starters, cleaning performance appears to be an issue with many pack-style detergents. Indeed, of the bunch we're testing, only the liquid-filled Tide Pods are tackling stains well enough to have a shot at making our recommended list. Designed for use in conventional and high-efficiency washing machines, Tide Pods cost an average of 22 cents per load—more than many detergents but not the most expensive in our roundup of nearly 70 detergents.

Safety is another concern with laundry detergent packs, in particular if you have small children at home. The packs, some of which come in bright colors, can be especially harmful if swallowed or rubbed into eyes. Since February, poison control centers have received more than 700 calls regarding exposure to single-use, laundry detergent packs involving children age five or younger.

Medical experts are still trying to determine whether it's the concentration of the packs or a specific ingredient in them that's behind the rash of incidents. "We're not sure why the clinical presentation is so different from what we see with straight up detergents," says Dr. Michael Buehler, Medical Director of the Carolinas Poison Center in Charlotte, North Carolina. "What we do know is that when children come into contact with these packs, a significant number of them will develop serious illness, which might include vomiting and lethargy. In some cases, they'll even stop breathing and require ventilation support."

In response to the reports, the Consumer Products Safety Commission is taking a close look at the single-use packs. "CPSC staff is actively investigating various brands of laundry packs and is working with the manufacturers, due to information coming to our attention of children ingesting the material inside of the packs," says spokesperson Scott Wolfson. "CPSC staff has made no conclusions with respect to the investigation."

Tide, meanwhile, has announced that it will be offering a safer double latch for its fishbowl-shaped plastic containers. Consumer Reports recommends keeping all detergents, along with any household cleaner, out of the reach of children. And if your child does swallow one of these single-use laundry packs, call the poison control helpline immediately at 800-222-1222, since serious effects can happen very quickly.

One more caveat about laundry detergent packs. Their coatings are designed to dissolve quickly in water, meaning you'll need to handle the packs with dry hands and keep the containers sealed to lock out humidity.

Despite those drawbacks, packs are poised to become the fastest-growing segment of the laundry detergent market. Consumer Reports encourages manufacturers to improve the performance and safety of these products. In the meantime, you might give the Tide Pods a try, or there are plenty of traditionally packaged detergents, both liquids and powders, for you to choose from in our current laundry detergent Ratings. If you have small children, remember to keep any detergent locked up and out of reach, since any detergent can be harmful if swallowed or rubbed into the eyes.