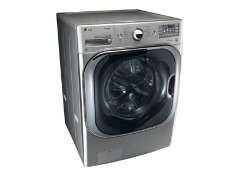 We probably didn't need another survey to tell us that 75 percent of American women find doing the laundry tedious. But LG did one anyway as part of the company's launch of what it's calling the industry's largest capacity washer, the LG WM8000. At a whopping 5.1 cubic feet, LG promises the spacious front loader will save both time and money because laundry can be dealt with in fewer loads.

According to LG, American women— the survey doesn't mention men—do laundry on average 2.8 times a week, a chore that takes eight hours or more. One out of three respondents said they do more laundry in the summer than at any other time of year. This one dreary task causes them to miss out on exercise, family time and social events, the women reported. LG claims the "mega-capacity" WM8000 can help them reclaim some of that time by accommodating larger loads and using the TurboWash feature, which it claims reduces cycle time by 20 minutes.

The WM8000 is on sale now ($1,399 for white and $1,499 for graphite) and Consumer Reports just brought one into the labs for testing. It's too early to tell if it will perform as well as its brandmate, the LG WM3470H[W]A, $1,100, which tops our front-loader Ratings. In addition to TurboWash, the new machine has what LG calls 6Motion, six different wash motions including tumbling, scrubbing, filtration, rolling, stepping and swinging that work in various combinations depending on the fabric. The WM8000 received Energy Star's Most Efficient designation, something we'll keep in mind as we test for energy and water efficiency.