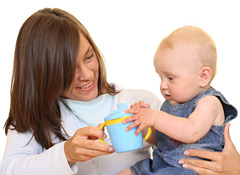 The U.S. Food and Drug Administration last week banned the use of bisphenol-A (BPA) in baby bottles and sippy cups nationwide. The FDA ban comes about nine months after the chemical industry petitioned the FDA to ban such uses on grounds of "abandonment," meaning that no one was using it for that purpose any more. The industry filed the petition less than two weeks after the ban was approved by the California legislature. Other states banned it earlier.

The federal ban is good news for consumers, but there's more still to do, said Jean Halloran, director of food policy initiatives at Consumers Union, the advocacy arm of Consumer Reports. "This is a big day for everyone who has worked so hard to get BPA out of our sippy cups and baby bottles," Halloran said. Consumers Union has long urged federal, state, and local governments to curb uses of BPA in food containers, especially those used by babies and young children. "FDA's next step should be to ban this chemical in infant-formula containers," added Halloran.

In an e-mail statement to Consumer Reports, the FDA said the agency "continues to support the safety of BPA for use in products that hold food." Update: FDA spokesman Curtis Allen added that "no other food products or linings or other plastics that may contain BPA have been banned. We still maintain that the scientific evidence has not led us to a point where we would be changing our recommendations on BPA generally."

Bisphenol-A is a chemical used to make hard, polycarbonate plastics, and has been used for years in clear plastic bottles and food-can liners. Studies show that BPA is in the bloodstreams of more than 90 percent of the population at levels that have shown harm in animal studies. Food appears to be a primary source of exposure. In December 2009, Consumer Reports published the results of tests of canned food that showed BPA was leaching into the contents of the can.

Consumers Union has long warned of the dangers of BPA in food containers to fetuses, infants, and small children, because children may metabolize BPA more slowly than adults and may therefore be particularly vulnerable to the substance. BPA has been linked to early puberty, breast cancer, childhood obesity, autism, and hyperactivity, as well as an increased risk of cancer, diabetes, and reproductive, neurological, and developmental disorders. "Babies' exposure to BPA, in particular, should be minimized in every way possible," Halloran said.

Despite evidence of harm, the California law took years to enact because the chemical and formula industries staunchly opposed it, said Elisa Odabashian, director of state campaigns in CU's California office. "The chemical and formula industries poured a lot of money into the effort to defeat the California ban," Odabashian said, adding that proponents of the California law were forced to concede key provisions in the bill, such as keeping BPA out of baby formula packaging (where formula spends more time than it does in baby bottles), in an effort to get some consumer protections in place rather than none. "Despite their vigorous efforts to keep BPA in baby bottles and sippy cups, once the chemical industry saw the writing on the wall in California, they tried to make it look like they'd already stopped using BPA and were taking a more proactive move to stop its use by petitioning FDA to ban it," said Odabashian.

BPA can still be found in cash register receipts and tooth fillings and sealants, Odabashian said. "We think BPA is bad for human health, and we want to get it out of all food contact containers, not just for infants. It should be banned in anything that can be ingested by humans."