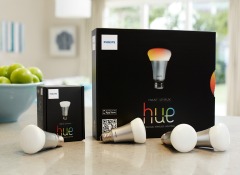 The Apple store is always crowded with device devotees checking out the latest iProducts, but starting tomorrow, October 30, Apple will start selling lightbulbs. But not just any lightbulbs. The Philips Hue LED web-enabled system, $199, lets you switch the color of the LED bulbs from warm to bright white or to almost any color in the rainbow using any smart device in your home or remotely with the flick of a finger. Consumer Reports bought a set from Philips a few days before it appeared on store shelves. Here's our initial take on what Hue can, and can't, do.

Inside Hue's box are three web-enabled LEDs and a bridge device that plugs into your wireless router. Additional bulbs are $59 each. Each system can control up to 50 bulbs using a free app with smart devices running on Apple iOS 4.2 or higher, or Android 2.2 or higher. Of course, you can still just turn the wall or lamp switch on and off for soft white light but what fun is that?

"Hue lets consumers use light in new and different ways, reading, relaxing, reminders, and ambiance," says Filip jan Depauw, director of connected lighting at Philips. The system enables you to create and save light settings—bright lights when the kids do homework, for example, and a softer setting for the grownups once the youngsters are asleep. You can also set lights to go on and off at specific times, or to slowly brighten in the morning as you awaken.

Philips continues to develop new product features. One will coordinate light with sound and video. Watching an action film? The lights can briefly flash orange when there's an explosion. Another future feature includes geo-location, allowing Hue to sense when you're nearing home and automatically turn on the lights. Software and feature upgrades can be sent to your system via the wireless connection and will be free "essentially future-proofing the customer's investment," according to a Philips press release.

These LEDs use technology that's different than the 60- and 75-watt replacement Philips LEDs that were rated tops in Consumer Reports lightbulb tests, and don't claim to be as bright. "The three LED chips in this bulb deliver 600 lumens. It's on the edge of what's possible for now," says George Yianni, Hue's designer. The system comes with a two-year warranty and the bulbs have a 15,000 hour claimed life.

CR's Take. Setting up the system was a snap, and the app was intuitive and easy to use. Consumer Reports tested three of the four pre-programmed settings of white light using an iPhone app and also by manually turning lamp switches on and off. We also played with Hue's color settings creating a light show in our labs.

In our initial tests, the LEDs provided light instantly and used even less energy than claimed. But there were some trade-offs between brightness and color temperature and accuracy. The brightest white setting "concentrate" met its claim of 600 lumens but the accuracy of some colors was a bit off, and the color of the light was cool white to bluish white. When the color of the light was warm, like an incandescent, the accuracy was great, but the light was only a bit brighter than a 40-watt bulb. Still, Hue takes lighting technology way past on, off and dimmable, redefining what a lightbulb can do. We're continuing to test the Hue in our labs and will update our reporting as we do.

View and compare all Lightbulbs ratings.