3M Streaming Projector is small and portable, but lacking in performance 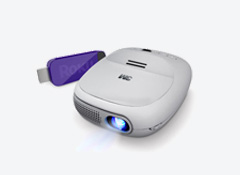 Ample picture quality now comes from small packages; you can stream high-quality video content using a smart phone or Roku's tiny, Wi-Fi-connected Streaming Stick, for example. Now a gadget that's almost as small as those, the 3M Streaming Projector Powered by Roku, can beam video images onto a wall or physical screen in your home. Unfortunately, the device's performance is commensurate with its modest size, I found in some informal tests.

The 3M Streaming Projector costs $300, measures 2 x 4.25 x 4.4 inches (HWD), and is powered by a built-in rechargeable battery. You can connect to any device, portable or not, via the projector's HDMI jack, but it's primarily intended for use with the Roku Streaming Stick, a large thumb-drive-sized device costing about $100. The Stick provides video of up to 720p resolution, and offers access to Netflix, Amazon Instant Video, Hulu Plus and Vudu premium streaming services, along with other widgets like Pandora, Facebook, news, and weather.

I used the projector and stick together in "field tests" in my apartment and also did some basic lab testing. Here's what I found.

The picture is OK, but can be dim. I found color accuracy to be passable overall, although the blacks were far from deep and more like a dark-gray haze. There were no obvious digital artifacts, such as the image dissolving into blocky squares. But with a resolution of barely 480p, the projector's images were noticeably soft and certainly less sharp than those we are accustomed to seeing from 720p resolution streams.

Also, thanks to those grayish blacks and the device's dim illumination, I had to watch in a completely dark room to get images with decent contrast, especially if I wanted the picture to be least 50 inches or so in size (measured diagonally).

You'll need external speakers. You can't rely much on the built-in speaker in a tiny device like this, and the projector's sound lived up to those low expectations. Audio quality was poor, I found, and the volume level was so low that the hum from the projector drowned out dialog during quieter scenes. For even passable sound, you'll need to connect external speakers.

But the projector has only a 3.5 mm stereo audio jack, an analog connection—which means even if you connect a home-theater system with Dolby Digital capability, you won't be able to enjoy multi-channel digital sound.

Set-up is easy, operation is less so. I found setting up the image of the projector to be simple enough, since there is only a single focus knob to adjust. But it was tough to find an open wall in my small apartment on which to project the image, and harder still to find a flat surface on which to place the projector that was the right distance and height from the spot on the wall.

Also, operating the projector itself was a bit of a headache. It takes more than 2 minutes for the Streaming Projector to boot up, and it comes with only a small remote with cramped buttons and very low contrast labeling, which I found extremely difficult to use in the pitch-black room. Even with the lights on, the small buttons made entering passwords and account information for Internet services much harder than on normal TV or Blu-Ray remotes.

The battery power is a mixed blessing. Though you may struggle with where to put the projector, you don't also need to worry about finding a nearby power outlet. But I found the rechargeable battery lasted only about an hour and a half when streaming, meaning you really need to plug it in from the get-go if you plan to watch for longer than that.

Bottom line. The 3M Streaming Projector Powered by Roku provided a better picture than I might have expected, given its size. But its claim to provide "movies the way they were meant to be" is laughable, given its ho-hum images. Further shortcomings in sound, battery life, and more make this anything but a good buy for movie lovers, especially at a fairly hefty $300.