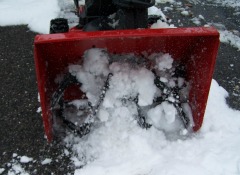 This week's early Nor'easter came just as we were testing this season's snow blowers at our Yonkers headquarters in New York. The latest batch comprises models from Craftsman, GreenWorks, Honda, Husqvarna, and Toro. Some new features, such as an anti-clog design and a simple-to-use chute control, have made a good first impression. But we'll reserve final judgment until the results of all our tough tests are in. In the meantime, check out the 23 winners in our current Ratings.

We recently told you about Toro's new models, two of which we bought: the 24-inch Power Max 724 OE, $799, and the 26-inch Power Max 726 OE, $899. Both snow blowers, along with the higher-end Power Max 826 OE ($999), feature what the company claims is an anti-clog feature. We took some extra time during testing to analyze how this actually works—and were pleased with what we saw.

In any snow blower operating in heavy snow, the chute behind the auger can become a bottleneck. While the impeller in a two-stage model is meant to provide heft to what the auger scoops up, snow that's especially moist and heavy tends to resist this upward motion out of the chute. When it rises too slowly to make way for the snow coming in from beneath, clogs occur.

With Toro's design, common across its two-stage models, snow that might otherwise pack tightly within the chute is too heavy to go up—but it can go across to a bypass built into the chute. Snow that slips over to this bypass falls back into the auger while the impeller has a chance to clear what's in the chute. We saw it working (see photo) with the 726 OE during our initial tests using snow from this week's storm. 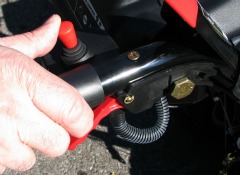 Another feature we found especially helpful comes on the 30-inch Craftsman 88396, $1,200, and a similar model sold under the Troy-Bilt name. It's a small, electrically powered joystick (at right) that provides all the chute control you need in heavy snow, with little fuss. Pushing the control forward or backward with your thumb raises or lowers the chute flap, which affects distance if you're trying to avoid hurling snow into your neighbor's driveway. Pushing it to the left or right swings the chute back and forth.

We don't yet have final results on these or the other models we're testing, but as soon as we do we'll add them to our snow-blower Ratings. In the meantime, check out our buying advice, which includes a video showing how we test.

Whichever model you buy, do yourself a favor and immediately buy any parts, such as belts, that might break—usually when you've got a driveway to clear. If you buy a two-stage model like those mentioned above, you should also keep some extra shear bolts on hand. These attach to the auger's shaft and snap when overstressed to protect the transmission. When they break, though, that part of the auger no longer turns. Replacing a broken shear bolt is easy, requiring only tapping in the new bolt to push out the remaining piece of the broken one, and then slipping in the accompanying pin to secure it—a 5- to 10-minute job. Cover the new bolt with motor oil or grease before tapping it in, and you'll slow down the inevitable corrosion.