In our tests, one Craftsman snow blower got bent out of shape 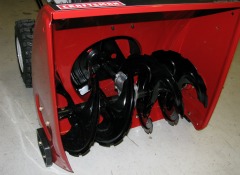 When you have a snow blower, you should expect some parts to wear out over time, and we encourage you to keep extra belts, shear bolts, and spark plugs on hand for that reason. What we don't expect to see in these machines are parts that bend under normal use. But that's what happened with the 24-inch Craftsman 88173, one of the otherwise better performers among the eight new snow blowers our experts have finished testing.

In two-stage machines like the $680 Craftsman, which has not only the usual snow-scooping auger but also an impeller that lifts out what the auger collects, the auger housing is always steel and typically pretty sturdy. When we completed testing on the compact 88173, however, we noticed the bottom edges of its auger housing had curled in on both sides (see photo above). It's not a permanent problem; with some muscle and the right tools, you can bend the metal back into position. Still, over time the corners could curl in enough to interfere with the auger. 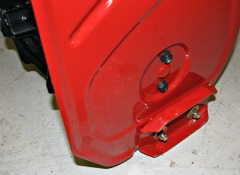 A closer look at the auger-housing corners of this and other snow blowers we tested provided more of an explanation—and even a simple fix. On the Craftsman 88173, this part of the auger housing is mostly a flat-metal plate. Yet on other models, such as the same-size Toro PowerMax 724OE, $800, the edges are ribbed (see photo, right) for greater strength. And when we looked at a higher-end Craftsman model, the 30-inch 88396, $1,200, we saw the solution.

Two-stage snow blowers have parts connected to the auger housing, called skid shoes, that protect the housing and its paint from direct contact with the ground. These Glide-Tech skid shoes are especially helpful in that they're reversible: When the part touching the ground wears down, you can flip it over. On this model, though, longer skid shoes like those in the larger Craftsman 88396, the Deluxe Glide-Tech, also fit and would support the auger housing to prevent any bending in the first place. They're sold at Sears for about $38 per pair before shipping. Those sold for other MTD-made brands, such as Troy-Bilt or Yard Machines, may also fit—but check.

If you're shopping for a snow blower, be sure to check out our buying advice. We'll be adding new models to the 40 we've already tested within the next week.