Tips for partying and driving safely this holiday season

Celebrate safely by planning ahead 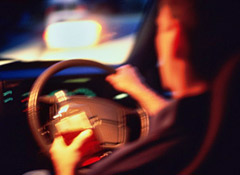 We are in the season of festivities, with many celebrations for the holidays and New Year's. But the sobering reality is that it's also a time of year when many people die on our roads due to drunk driving. Last year, 830 people died during the holiday season in these crashes.

In 2012, 10,322 people were killed in alcohol-related car crashes, an increase of 4.6 percent over last year. These crashes continues to represent about a third of all traffic deaths, which has remained constant for the last 10 years.

One way to combat the problem is through ignition interlock devices. The National Highway Traffic Safety Administration (NHTSA) has found that convicted drunk drivers with interlocks installed are 75 percent less likely to repeat the behavior than those who do not have interlocks. NHTSA has provided states with guidelines to encourage them to implement an interlock program to help protect sober drivers and make those convicted learn from their mistakes. Currently, 18 states have enacted these laws for first time offenders.

In an effort to curb dangerous behavior this festive time of year, there is a seasonal drunk-driving campaign "Drive Sober or Get Pulled Over" running nationwide now through the New Year. Police will be out in force conducting traffic stops to catch offenders and spread the word that drinking and driving don't mix.

Here are some tips to keep in mind as you celebrate the holiday season.

Have fun this holiday season, but do stay safe. For more on vehicle safety, see our special section and our report on how to reduce highway fatalities.